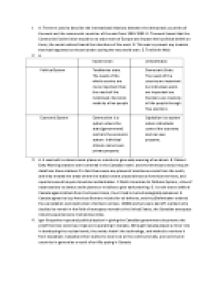 ﻿1. A. The term used to describe the international relations between the democratic countries of the west and the communist countries of the east from 1945-1989. B. The west feared that the Communist Soviet Union would try to seize more of Europe and impose their political beliefs on them; the soviet nations feared the intentions of the west. D. This was to prevent any invasion that had happened on those borders during the two world wars. E. The Berlin Wall. 2. A. Soviet Union United States Political System Totalitarian state. The needs of the whole country are more important than the needs of the individuals. Decisions made by a few people Democratic State. The needs of the country are important but individual wants are important too. ...read more.

E. Canada agreed to buy American Bomarc missles for air defense, and thusDiefenbaker ordered the cancellation and destruction of all Avro Arrows. 13000 workers were laid off, workers who decided to remain in the field of aerospace moved to the United States, the Canadian aerospace industry experienced a tremendous blow. 2. Igor Gouzenko requested political asylum in giving the Canadian government documents the proof that two soviet spy rings were operating in Canada. Although Canada played a minor role in developing the nuclear bomb, the soviets hadn?t the technology, and wished to retrieve it from Canadians. Canadians then started to lose trust at the communist ally, and communist countries in general as a result of an Ally spying in Canada. 3. A. Canadian foreign policy had to be tied to American ones as only the United States was powerful enough to withstand soviet threats, and they believed that Communism must be contained. ...read more.

B. To work collectively to bring an end to war, to encourage co-operation among nations, to improve the standard of living for all nations, to promote basic human rights. C. It played a role in General Assembly and the Security Council, but now plays a more prominent role in peacekeeping efforts. D. North and south korea divided, north becomes communist, supported by Soviet Union, North Invades south, south appeals to UN, North declared agressors, UN force from 32 countries led by American forces came to aid. E. The members were actively fulfilling the goals of the UN, they were ready to take action to face aggressors. F. The Soviet union declared support for Egypt, who were aggressors of the UN nations like France and Britain in the crisis. G. He suggested forming UNEF (United Nations Emergency Force) that would take up positions between the combatants, keeping them apart while settlement was worked out. He was awarded with the Nobel peace prize. ...read more.