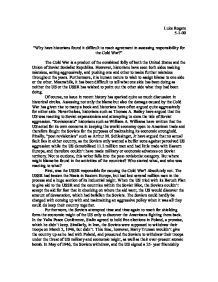 Luke Rogers 5-1-00 "Why have historians found it difficult to reach agreement in assessing responsibility for the Cold War?" The Cold War is a product of the combined folly of both the United States and the Union of Soviet Socialist Republics. However, historians have seen both sides making mistakes, acting aggressively, and pushing one and other to make further mistakes throughout the years. Furthermore, it is human nature to wish to assign blame to one side or the other. Meanwhile, it has been difficult to tell what one side has been doing as neither the US or the USSR has wished to point out the other side what they had been doing. Of course, no issue in recent history has sparked quite so much discussion in historical circles. Assessing not only the blame but also the damage caused by the Cold War has given rise to many a book and historians have often argued quite aggressively for either side. Nevertheless, historians such as Thomas A. Bailey have argued that the US was reacting to Soviet expansionism and attempting to stem the tide of Soviet aggression. ...read more.

the Soviets couldn't accept the aid for fear that in checking on where the aid went, the US would discover the amount of devastation, which had befallen the Soviets. The Soviets could hardly be charged with coming up with and maintaining an aggressive policy when it was all they could do keep their country together. Furthermore, the Soviets attempted time and time again to reach for shielding form the economic might of the US only to discover the Americans fighting them back. In the Yalta Peace Conference, Stalin agreed to hold free elections in Poland, a promise, which he didn't keep. Similarly, in Iran, the Soviets were supposed to withdraw their troops on March 2, 1946, but didn't. This time, however, Harry Truman wouldn't give the country up as he had with Poland, and pressured the Soviets to withdraw their troops under the threat of US military and economic might, as well as their ever-present atomic bomb. In May of 1946, the Soviets withdrew, and the US signed a 25- year friendship with Iran as well as began to trade arms with them. ...read more.

The Soviets were entirely too defeated by the Second World War to bring about an aggressive policy of expansion and were blinded by their wounds to the true intentions of the allied powers. The US, on the other hand, had their own reasons for their actions. While Harry Truman was restricted by the American System of Government and public opinion, it was still by far and away the Americans who were in the driver's seat in the Cold War. Nevertheless, they were still blameless for the simple follies they made in watching Soviet policy. The Americans saw a Red boogey man in every corner while they felt that they had tried to be as civil as possible to the Soviets. They had helped to defeat the enemy, which had injured the Soviets (through Truman couldn't have imagined quite how injured), they had offered aid to the Soviets and the Eastern European countries, and they had tried to extend a hand of friendship despite highly to undermine their government and very way of life. ...read more.