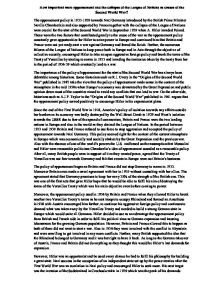 Collapse of the League of Nations

How important were appeasement and the collapse of the League of Nations as causes of the Second World War? The appeasement policy in 1933-1939 towards Nazi Germany introduced by the British Prime Minister Neville Chamberlain and also supported by France together with the collapse of the League of Nations were crucial for the start of the Second World War in September 1939 when A. Hitler invaded Poland. These were the two factors that contributed greatly to the cause of the war as the appeasement policy constantly gave opportunities for Hitler to seize power in Europe and convinced him that Britain and France were not yet ready start a war against Germany and feared the Reich. Further, the numerous failures of the League of Nations to keep peace both in Europe and in Asia through the objective of collective security, encouraged Hitler to take an open aggressive foreign policy and break the terms of the Treaty of Versailles by starting to rearm in 1933 and invading the territories taken by the treaty from her in the period of 1936-39 which eventually lead to a war. The importance of the policy of appeasement for the start of the Second World War has always been debatable among historians. Some historians such as R.J. Overy in the "Origins of the Second World War" published in 1987 take the view that the policy of appeasement made sense in the context of the atmosphere in the mid 1930s when Europe's economy was devastated by ...read more.

Hence, in 1938 with the Munich agreement he received control over the Sudetenland. In this way the British Prime Minister satisfied Hitler's ambitions by preventing a military confrontation. The policy of appeasement encouraged Hitler's actions even more and made him seize opportunities to add more land to German territory without starting a war. In 1939 when he signed a Non-Aggression Pact with the Soviet Union and secretly divided Poland in two among themselves Hitler insured that Germany would not fight a war on two fronts. Therefore, as he knew the Soviet Union would not attack her Germany invaded Poland in 1939. Hitler believed that Britain and France would not do anything and take again a peaceful approach but he miscalculated the consequences of this invasion as they did declare war on Germany two days after. It can be clearly seen that Britain and France encouraged Hitler's expansionist ambitions trough their appeasement policy as they breed in him the belief they would do anything in order to avoid a conflict. Hitler then decided to play on their wish to escape war in any costs and continuously demand territories that previously belonged to Germany till Britain and France understood after the Munich crises that he could not be trusted and decided to stop their appeasement policy when Hitler invaded Poland which led to war. Hence, their appeasement policy since 1933 only delayed the beginning of the future war as it allowed Germany to grow bigger and build up strength. ...read more.

However, the League's second failure to help Abyssinia from Mussolini's invasion in 1935 totally proved Hitler the League's incompetence to keep peace as well as insignificance in foreign affairs. Therefore, this encouraged him further and gave strong grounds for his future attacks on the Rhineland, Austria and Sudetenland. The League's inefficient organization, communication as well as lack of commitment and participation of world powers contributed to her collapse and therefore, cause of the WWII. Due that the League could not keep peace and stop the hostile actions of relevantly less powerful countries such as Japan and Italy her reputation was ruined and opened a door to Germany to begin her aggression in Europe which eventually led to war. Both the appeasement policy and the collapse of the League of Nations were long-term causes of the Second World War. They encouraged and gave Hitler opportunity to begin an aggressive foreign policy in Europe and to demand all the territories taken away from Germany by the Versailles Treaty. It is often said by historians that Hitler was an opportunist by nature, which made him so successful in building a strong Reich he knew how to use each chance that opened to him to achieve his aims. Hence, both Churchill's appeasement policy and the League's weaknesses to keep peace due to inefficiency and lack of its member's commitment convinced him of Europe's inability to stop his policies as well as gave him various opportunities to add land to Germany without war and exactly his exploitation of this opportunities led to the start of the Second World War in 1939. ...read more.