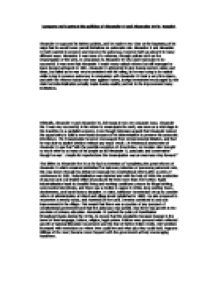 Similarly Alexander III had the same aims in improving the economy radically. Alexander III established land banks in 1883 and this provided cheap credit for peasants to buy land. For the very first time Russia's budget achieved a surplus. Between 1881 - 85 the labour legislation was introduced to improve working conditions for women and children with factory inspections. Both Alexander II and Alexander III were very weak in trying to improve agriculture in Russia, they make very little change overall. Socially, Alexander II and Alexander III were similar in being successful in improving issues within education they both gave considerable amount of freedom but at the same time wanting to restrict the Russian people from formulate their own ideas so they wouldn't be able to question the system, this also apply to judicial reforms. Alexander II was strategically intelligent in the creation of the Zemstva - which was the spreading of power from tsar to the general population, they could better handle local issues that the central government (in comparison to Alexander III who . The standard of teaching improved as responsibility was transferred from the church to the zemstva in 1864. Schools were declared open to all classes and the number of primary schools in the countryside grew from 8000 to 23000 in 1880. ...read more.

Before emancipation, serfs could not receive military training and then return to their owners. Bureaucratic inertia, however, obstructed military reform until the Franco-Prussian War (1870-71) demonstrated the necessity of building a modern army. The levy system introduced in 1874 gave the army a role in teaching many peasants to read and in pioneering medical education for women. But the army remained backward despite these military reforms. Officers often preferred bayonets to bullets, expressing worry that long-range sights on rifles would induce cowardice. In spite of some notable achievements, Russia did not keep pace with Western technological developments in the construction of rifles, machine guns, artillery, ships, and naval ordnance. Alexander III's reforms of the 1880s-90s succeeded in enhancing the importance of traditional social estates, and satisfied conservatives by undermining Alexander II's reforms in the 1860s. They partially made the same reforms in the terms of improving education and judical freedom however they were very different in many respects. Alexander II made many reforms however was inconsistent in his ruling, he tried to be a radical while preserving the autocracy, and this led to the downfall of the Russian economy, leaving Russia backwards. Alexander III however kept a firm stance in ruling, and built the foundation in which Russia could modernise. ...read more.