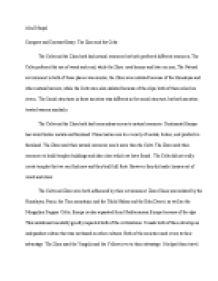 Compare and contrast the Celts of Europe and the Zhou of China.

﻿Akul Munjal Compare and Contrast Essay: The Zhou and the Celts The Celts and the Zhou both had natural resources but both preferred different resources, The Celts preferred the use of wood and mud, while the Zhou used bronze and later on iron, The Natural environment in both of these places was similar, the Zhou were isolated because of the Himalayas and other natural barriers, while the Celts were also isolated because of the Alps, both of them relied on rivers, The Social structures in these societies was different in the social structure, but both societies treated women similarly. The Celts and the Zhou both had tremendous access to natural resources. Continental Europe has wood timber metals and farmland. China had access to a variety of metals, timber, and productive farmland. The Zhou used their natural resources much more then the Celts. The Zhou used their resources to build temples buildings and also cities which we have found.. The Celts did not really create temples that we can find now and they built hill forts. However they did make houses out of wood and straw. ...read more.

They used hill forts for defense and that is where they were based, so this one difference made a big impact on the Celts. The Social System in both Zhou China and Celtic Europe were similar. Celtic Europe had classes. There were the commoners, the professionals, the warriors, the bards, and the Druid priests. The Zhou had commoners, professionals, the aristocracy, the warriors, and the wandering people that taught their views on government. The commoners in both of these civilizations were very similar, they were the farmers and the people who were dependant on the aristocracy. The professionals in both places were also very similar; ironworkers were an example of professionals. The Zhou and Celt warriors were very different. The Celtic warriors were the elite, they owned the land, and were very cruel and fighting was their main thing. The Zhou warriors thought a lot more. Sunzi?s ?Art of War? had a huge impact on the way warriors fought. They felt the goal was not just to beat them, but also to take their resources. Thus they felt the best victories were the wars done when no or little fighting had taken place. ...read more.

The Zhou held the belief in the Yin and the Yang. This meant that both the women and the men were equal. In practice this wasn?t the case. Male children had a higher value then female children (they could carry on the family name and be the heir to the fathers property). Males were also encouraged to have multiple sexual partners if his wife was not giving birth to a son. Females were also not encouraged to remarry if her husband died while if a man?s wife died he was encouraged to remarry. The husbands also had power over their wife. Celtic women were treated not as well. Their lives were focused on child rearing, food production and basic crafts. They had more sexual freedom though, and they could inherit property (this was not allowed in Zhou China). The Social structure at the time of the warring states was very similar. Both of the societies were based on large clan type of living. They also were not unified with the rest of their people, and they had wars with their people very often. The reason this happened was because the Celts were always war and conflict loving people, and the Chinese people were doomed to separate because of their varying ethnicities and lack of unity. ...read more.