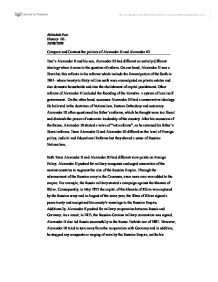 Abhishek Puri History- HL 20/08/2009 Compare and Contrast the policies of Alexander II and Alexander III Tsar's Alexander II and his son, Alexander III had different an entirely different ideology when it came to the question of reform. On one hand, Alexander II was a liberalist, this reflects in his reforms which include the Emancipation of the Serfs in 1861- where twenty to thirty million serfs were emancipated on private estates and also domestic households and also the abolishment of capital punishment. Other reforms of Alexander II included the founding of the Zemstva- a system of local self-government. On the other hand, successor Alexander III had a conservative ideology. He believed in the doctrines of Nationalism, Eastern Orthodoxy and autocracy. Alexander III often questioned his father's reforms, which he thought were too liberal and diminish the power of autocratic leadership of the country. After his accession of the throne, Alexander III started a wave of "anti-reforms", as he reversed his father's liberal reforms. ...read more.

However, under Alexander III, the power under the Zemstva was acutely restricted. These administrative powers held previously by the Zemstva were handed to the Ministry of Interior in 1889. Thus, Alexander III restricted what people could do in Russia and accumulated that power in his own hands. Another contrasting policy between the Tsars was that of Education. Previously, education was only affordable to the very wealthy. However, Alexander II began a new era in terms of who could receive education. In order to increase literacy in Russia, Primary and Secondary Education was available for all citizens of the empire by 1863. Alexander II also permitted the discussion of sensitive topics in universities such as government and law. This liberalization of the education system resulted in much higher literacy rates and the ability for students to express themselves. However, Alexander III saw this universal education coverage as a threat to Russian autocracy. Therefore, the high schools could not allow admissions for all social classes; Grammar schools were restricted only for the elite. ...read more.

Thus, the policy of promoting Russian ethnicity and suppressing other ethnicities was shared by both Tsars, but Alexander III pushed his father's policies to a further level due to his belief that it was the ethnic minorities who were responsible for Alexander II's death. Alexander II had envisioned a modern Russia and thus, implemented his liberal Judicial and Educational policies. However, Alexander III viewed these policies as a threat to Russia autocracy and immediately began reversing them when he accessed the throne. Russia had a lot to gain from Alexander II's policies such as, high literacy rates and a modern perspective. However, Alexander III made sure his policies concentrated as much power towards him and restricted the power given to the common man. At the same time, Alexander III was more a more responsible leader in terms of Foreign policy as he had to secure the country's economy- waging war and conquests for annexation only strain economic growth. The Russian Empire was vast and comprised of numerous ethnicities; both Tsar's created policies which sponsored the belief that the empire should be "Russified" and the influence of ethnic minorities must be kept to a bare minimum. ...read more.

**/***
There are some good contrasts in this essay but there is a tendency for them to read as simple, implicit differences. The essay would benefit from better organisation and rigorous, critical analysis when discussing these two Tsars. There are many areas of comparison - both were Tsars with a divine right to rule. They both wanted the same goal for Russia but came at the problem from two different angles. Create a compare/contrast table before approaching an essay such as this and look at such factors as; political, economic, religious, social intellectual etc this will help organise your ideas more clearly and gives you a framework to follow in your answer. It also helps you work on a thesis which you can hang your argument off. Overall, some good points but a little one sided in favour of differences.