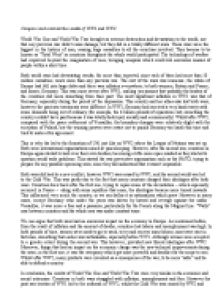 Compare and contrast the results of WW1 and WW2

﻿Compare and contrast the results of WW1 and WW2. World War One and World War Two brought an extreme destruction and devastation to the world, not that any previous war didn't cause damage, but they did in a totally different scale. These wars were the biggest in the history of men, causing huge casualties to all the countries involved. They became to be known as ?Total Wars? as countries throughout the whole world participated. The technology of warfare had improved beyond the imagination of men, bringing weapons which could kill enormous masses of people within a short time. Both world wars had devastating results, far more than expected, since each of them had more than 10 million casualties, much more than any previous war. The cost of the wars was immense; the whole of Europe had fell into large debts and there was inflation everywhere; to both winners, Britain and France, and looser, Germany. ...read more.

This is why the led to the formation of UN, just like on WW2 where the League of Nations was set up. Both were international organizations aimed at peacekeeping. However, after the second war, countries in Europe again started to look over their own borders, becoming a little more open minded as they started to question world wide problems. This started the war-preventive organization such as the NATO, trying to prepare for any possible upcoming wars, since they did understand that it wasn't impossible. Both wars did lead to a new conflict, however WW2 was caused by WW1, and the second world war led to the Cold War. This was partly due to the fact that many countries changed their ideologies after both wars. Countries drew back after the first one, trying to repair some of the devastation ? which especially occurred in France ? along with some republics that came, the ideologies became more turned inwards. ...read more.

This however, provided new liberal ideologies after WW2. Moreover, things that had an impact on the economic change was the new technical improvements during the wars; in the first one, it was the weaponry which got more powerful and deadlier for the scope to win. Whilst after WW2, many products were invented as a consequence of the war, to be more ?safer? and be able to defend a country. In conclusion, the results of World War One and World War Two were very similar in the economic and social outcomes. Countries in both wars struggled with inflation, unemployment and fear. However the post-war treaties of WW1 led to the outbreak of WW2, whilst the Cold War was caused by WW2 and the great tensions and different ideologies between the major powers. Germany and the countries allied with it lost both wars even though the treatments differ. ...read more.