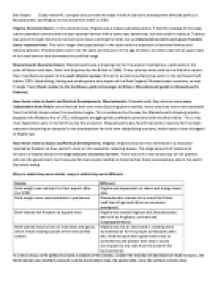 Compare and contrast the ways in which economic development affected politics in Massachusetts and Virginia in the period from 1607 to 1750.

﻿Ben Brazee Essay review #3, compare and contrast the ways in which economic development affected politics in Massachusetts and Virginia in the period from 1607 to 1750. Virginia Economic Basics: In the colonial times, Virginia was a tobacco growing colony. It had the makings of the large cotton plantation owners and the poor yeoman farmers with a slave class below that, but was used for tobacco. Tobacco was grown through indentured servants and slaves working the fields, but as indentured servants were given freedom slaves replaced them. This led to larger slave populations in the south and the expansion of yeoman farmers and tobacco growers. The plantations were not the same as they were in the age of cotton, but there was still an upper class of rich land owners that dominated the political stage. ...read more.

How these relate to Social and Political Developments, Massachusetts: Massachusetts Bay colonies were more independent from Britain once they had their own manufacturing sphere started, hence why they were more separatist from the British Empire when the revolution began. This is evidenced by the way the Massachusetts shipping industry bypassed the Molasses Act of 1733, bribing and smuggling their profitable commerce with the West Indies. This is why most Separatists were in the North during the revolution. Massachusetts also found that lumber reserves for the king?s navy were becoming an obstacle for the development for their own shipbuilding economy, which lead to more disregard of English law. How these relate to Social and Political Developments, Virginia: Virginia would be less interested in a revolution inspired by freedom as they couldn?t count on the revolution retaining slavery. ...read more.

Both sought more representation in parliament Massachusetts wanted to be more like Britain itself then Virginia did (from an economic standpoint). Both wanted the freedom to expand west Virginia was mostly Anglican still; Massachusetts was built by Anglicans, puritans and Congregationalists). Both wanted lower prices on manufactured goods, which meant trading outside of the mercantilist system. Virginia was not as interested in creating more representation for the people as Massachusetts was, likely because their government was so controlled by the planter elite that it would not respond to any calls from the yeomen for representation. To write an essay on the political-economic evolutions of the colonies, consider the transition of indentured servitude to slavery, the first divide between Northern economic systems and Southern ones, the planter elite versus the northern common man. Compare and contrast the ways in which economic development affected politics in Massachusetts and Virginia in the period from 1607 to 1750. ...read more.