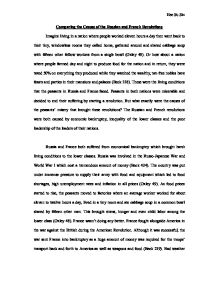 Comparing the Causes of the French and Russian Revolutions

Comparing the Causes of the Russian and French Revolutions Imagine living in a nation where people worked eleven hours a day then went back to their tiny, windowless rooms they called home, gathered around and shared cabbage soup with fifteen other fellow workers from a single bowl (Oxley 48). Or how about a nation where people farmed day and night to produce food for the nation and in return, they were taxed 50% on everything they produced while they watched the wealthy, tax-free nobles have feasts and parties in their mansions and palaces (Beck 218). These were the living conditions that the peasants in Russia and France faced. Peasants in both nations were miserable and decided to end their suffering by starting a revolution. But what exactly were the causes of the peasants' misery that brought these revolutions? The Russian and French revolutions were both caused by economic bankruptcy, inequality of the lower classes and the poor leadership of the leaders of their nations. Russia and France both suffered from economical bankruptcy which brought harsh living conditions to the lower classes. Russia was involved in the Russo-Japanese War and World War I which cost a tremendous amount of money (Beck 434). The country was put under immense pressure to supply their army with food and equipment which led to food shortages, high unemployment rates and inflation in all prices (Oxley 49). ...read more.

The government also tried to cover up the news of the famine to the public by manipulating the reports in newspapers (Oxley 45). In January 9, 1905, the famous Bloody Sunday occurred where 105,000 workers led by Georgii Gapon went on a peaceful protest to the Tsar requesting for reinstatement such as an increase in wages, reduction of working hours, and better working conditions (Gapon). Their protest failed as the government completely ignored their plea and shot them down with no mercy when they refused to leave (Oxley 59, 60). The reaction of the government to the peasant's famine and peaceful protest clearly shows us that the government ignored the peasants and their pleas. France's lower class was also living in inequality. France's caste system was divided into three estates where the 1st and 2nd estate consisted of the church and nobles and the 3rd estate which made up 97% of the population, consisted of peasants. The 3rd estate was the only estate that had to pay tax, which was 50% of their income (Beck 218). While the 3rd estate was carrying the burden of tax, the 1st and 2nd estates paid no tax, owned 30% of the land and had access to high government positions (Beck 217). The wealthier 3rd estate member, the bourgeoisie desired more political power and privileges as the first and second estates (Beck 217). ...read more.

Louis XVI's decision to follow the medieval rules rendered the third estate's vote useless as the first and second estate easily outvoted them (Beck 218). The people started to view Louis XVI as a weak and indecisive leader who did not see and care at all the demands of the peasants and the country. Both leaders Nicholas II and Louis XVI made crucial mistakes; Nicholas who killed Russia economically by dragging Russia to World War I and left his wife in charge; Louis XVI who ignored the financial crisis, ignored his chief financial advisor's reforms and ignored the third estate's request in the Estates-General which got the nation, especially the peasants irritated. The causes of the French and Russian Revolution were very similar. Both countries were bankrupt due to involvement in wars which led to sky-rocketing food prices and starvation. Both countries had lower classes that paid high taxes and received ignorance from the government. Both countries had leaders who made crucial mistakes and failed to lead their country into the proper direction. Had Russia not have gotten involved in World War I or had France not been involved in the American Revolution, and listened to the demands of the peasants, both revolutions could have been prevented. These factors stirred discontentment among the nation and caused the people to take charge and bring a change to their government because what the people truly wanted was to fulfill their dream of a country with food, freedom and equality. ?? ?? ?? ?? Hee Su Sin ...read more.