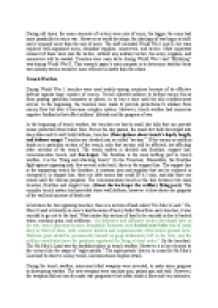 ﻿During old times, the main elements of victory were size of army; the bigger the army had more possibility to win a war. However as world develops, the ideology of war begin to shift, and it required more than the size of army. The shift included World War I and II[a]; the wars required well-organized army, abundant supplies, maneuvers, and tactics. Most important element of these wars was the tactics, without any military tactics, the army, supplies, and maneuvers will be wasted. Trenches were main tactic during World War I and ?Blitzkrieg? was during World War II. This research paper?s main purpose is to determine whether these two military tactics would be more efficient in battle than the others. Trench Warfare During World War I, trenches were used widely among countries because of its effective defense against large number of enemy. Trench allowed soldiers to defend enemy forces from passing particular bounders or places, or to buy a time until the ally reinforcement[b] arrives. In the beginning, the trenches were made to provide protections to soldiers from enemy fires but later it becomes complex system. However, trench warfare had numerous negative feedbacks that affect soldiers? lifestyle and the progress of war. ...read more.

Secondly, the poison gas made the trench warfare much bloodier because of its super effectiveness in massacring people. When poison gas is released in the trench, it spread out quickly and will stay for long period in enclosed space. Thirdly, the tank provided progress to the war by being the moving shield for ally infantries. However, tank at that time really lack speed; slower than man?s normal walking pace. Also ironically, the tank will fall into trenches because of the deep depth of trench and tank?s slow speed that makes impossible to pass the trench. The new weapons somehow made progressive in slow trench warfare to be ongoing, but made it much slower. Trenches were infested with rats and lice due to its enclosed spaces. And also soldiers? bad hygiene that makes them easy target for illness; soldiers were unable to wash themselves because of limited spaces, and water supplies. Sometimes, when it rains, the trenches are flooded with rain water, drowning soldiers or damaging supplies. If the water does not drain fast, it will be contaminated from dead corpses in the trench. ...read more.

Meanwhile, trench warfare was purely military versus military. Only looking at the death counts of two World Wars, it already shows that blitzkrieg was far more progressive and effective in battles than trench; less military death due to short period time of battle until the enemy surrenders. (World War II Statistics) [d] Conclusion Overall, the trenches were used for resist enemy forces, and to protect soldiers from enemy attacks. However, the trench warfare during World War I had greater death counts than World War II mainly because of diseases. In comparison to the trench warfare, blitzkrieg was more successful during World War II; there were lot more progress in the war and more effective. With armored and aerial supports, the army can easily break through enemy defense line. But this tactic lack reinforcement, since blitzkrieg is based on high mobility and offense rather than defense due to limited supplies. These two tactics: trench and blitzkrieg cannot be determines as good or bad tactics because it?s depended on which situation that was used. But the efficiency on the battle will be the blitzkrieg than trench; the high mobility acted as spearhead and breaks through defense line, while trenches are for resist enemy forces. ...read more.