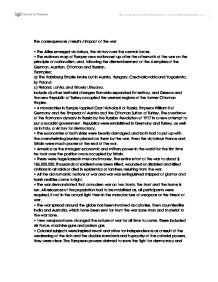 The consequences / results / impact of the war � The Allies emerged victorious, the victory over the central forces. � The redrawn map of Europe: new nations set up after the aftermath of the war on the principle of nationalism, and, following the dismemberment of the 4-empires of the German, Austrian, Ottoman and Russian. Examples: a) The Habsburg Empire broke out in Austria, Hungary, Czechoslovakia and Yugoslavia. b) Poland c) Finland, Latvia, and Estonia Lithuana. include d) other territorial changes Romania expanded its territory, and Greece and the new Republic of Turkey occupied the western regions of the former Ottoman Empire. � 4 monarchies in Europe toppled Czar Nicholas II of Russia, Emperor William II of Germany and the Emperor of Austria and the Ottoman Sultan of Turkey. ...read more.

� There were huge losses in men and money. The entire effort of the war to about $ 186,000,000. Thousands of soldiers have been killed, wounded or disabled and killed civilians in air raids or died in epidemics or famines, resulting from the war. � All the old romantic notions of war and war was extinguished stripped of glamor and harsh realities came to light. � The war demonstrated that a modern war on two fronts, the front and the home is run. All resources of the population had to be mobilized as, all participants were required, if not in the actual fight then in the manufacture of weapons or the threat of war. ...read more.

� The role of the woman beside the men in the workplace has been permanently established. � The resentment against the Treaty of Versailles and the peace agreement of 1919-1920 led to the rise of dictatorship in Russia, Germany and Italy soon after the war. 1) All countries of the world were prohibited from entering the secret alliances or treaties. 2) The Member States were not to get huge armies, warships, and destructive weapons. 3) All countries should respect each others independence. 4) All states should increase their mutual disputes, if any point, the League of Nations for a peaceful solution. 5) Apart from the political functions, was the League of Nations to cultural, social and economic cooperation among member countries promoted. ...read more.