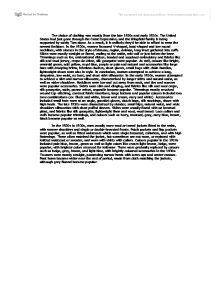 The choice of clothing was mostly from the late 1920s and early 1930s. The United States had just gone through the Great Depression, and the Wingfield family is being supported by solely Tom alone. As a result, it is unlikely they'd be able to afford to wear the newest fashions. In the 1920s, women favoured V-shaped, boat-shaped and low round necklines, with sleeves in the style of kimono, raglan, dolman, long inset gathered into cuffs. Skirts were mostly straight or flared, ending at the ankle, mid-calf or just below the knee. Trimmings such as fur, embroidered ribbon, beaded and sequined embroidery and fabrics like silk and wool jersey, crepe-de-chine, silk georgette were popular. ...read more.

Patch pockets and flap pockets were popular, as well as fitted waistcoats which were single breasted, collarless, and with high fastenings. These often matched the jacket, but sometimes are not worn, or replaced with knitted waistcoat or sweater, and worn with shirts with collars. Colours popular in the 1920s included pale blue, brown, green as well as light colors like cream light brown, beige, were popular, with brighter colors reserved for knitwear. There were gradually replaced by colours such as beige, grey, brown, and light blue, with brightly coloured accessories in the 1930s. Trousers were mostly straight, possessing narrow hems with turns-ups and center creases. Pant hems became wider near the end of period, made from cloth matching the jackets, although grey flannel became popular. ...read more.