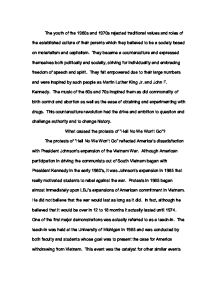 Counterculture - What caused the protests of Hell No We Wont Go?

The youth of the 1960s and 1970s rejected traditional values and roles of the established culture of their parents which they believed to be a society based on materialism and capitalism. They became a counterculture and expressed themselves both politically and socially, striving for individuality and embracing freedom of speech and spirit. They felt empowered due to their large numbers and were inspired by such people as Martin Luther King Jr. and John F. Kennedy. The music of the 60s and 70s inspired them as did commonality of birth control and abortion as well as the ease of obtaining and experimenting with drugs. This counterculture revolution had the drive and ambition to question and challenge authority and to change history. What caused the protests of "Hell No We Won't Go"? The protests of "Hell No We Won't Go" reflected America's dissatisfaction with President Johnson's expansion of the Vietnam War. Although American participation in driving the communists out of South Vietnam began with President Kennedy in the early 1960's, it was Johnson's expansion in 1965 that really motivated students to rebel against the war. Protests in 1965 began almost immediately upon LBJ's expansions of American commitment in Vietnam. He did not believe that the war would last as long as it did. In fact, although he believed that it would be over in 12 to 18 months it actually lasted until 1974. ...read more.

The movement was characterized by groups such as Students for a Democratic Society (SDS) who were formed to consolidate management and execute their ideologies. These groups were primarily composed of university students. These groups sought individual freedom, they were against government bureaucracy and they were especially opposed to the influence that corporate America had on society. The goal of the New Left was to change the morals and ethics of America to reflect their own ideals. The SDS was founded at the University of Michigan in 1960. This group actually coined the phrase "New Left" in their 1962 Port Huron Statement. This statement attacked the lack of individual freedom and the power that they perceived to be held by the government, corporations, and universities. For the SDS, colleges and universities were a natural base to promote their ideals and to subsequently promote change in America. The Free Speech Movement was formed at the University Of California at Berkley, in 1964 and was focused on the War in Vietnam. It was there where sit-ins and takeovers of campus buildings became a common way to protest. In 1965, a national campaign was instituted against the draft. The frequency and intensity of protests against the draft grew through the middle years of the 1960's. In the first half of 1968 more than 100 colleges and universities participated in demonstrations of several issues including the war. ...read more.

One can compare the youth hippie movement of the 60's and 70's to the youth counterculture that existed in the "roaring 20's." Prohibition in 1920 made it a crime to manufacture, transport, or sell alcohol. For many, consuming alcohol became a way to rebel against these restrictive laws. Whereas the youth of the 60's and 70's were attracted to marijuana, the drug of choice in the 1920's was alcohol. As for music, the hippies had rock and roll, and the 1920's culture listed to jazz. Women in both eras rejected traditional roles. The "Flappers" of the 20's dressed in a provocative way (for the day) and drank alcohol and danced to excess. Women in the 60's and 70's engaged in sex and drugs, and drew attention to themselves by showing their unwillingness to conform to what previous generations expected of them. The counterculture of the 1960's and 1970's was characterized by increased disapproval toward conventional American standards and morals. They had some major issues at the basis of their dissent including the War in Vietnam and Civil Rights. To show their separation from their elders they wore unorthodox clothing and grew their hair long. At the beginning of the social revolution, protests were more toward moralistic events such as the War in Vietnam however, as the decade progressed the tone of the movement became more self indulgent. All of these characteristics and manifestations helped to define the counterculture of the 1960's and 1970's. Notes 1Oates, Stephen B. Portrait of America. 5th ed. Vol. 2. Boston: Houghton Mifflin Company, 1991. 2http://www.well.com/~mareev/TIMELINE/1969-1979. ...read more.