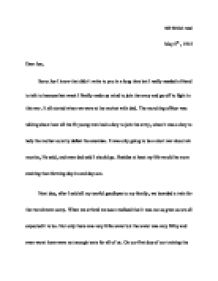 Creative writing. Letters from the trenches.

469 British road May 5th , 1915 Dear Joe, Sorry Joe I know that didn't write to you in a long time bet I really needed a friend to talk to because last week I finally made up mind to join the army and go off to fight in this war. It all started when we were at the market with dad. The recruiting officer was talking about how all the fit young men had a duty to join the army, since it was a duty to help the mother country defeat the enemies. It was only going to be a short war about six months, He said, and even dad said I should go. Besides at least my life would be more exciting than farming day-in and day-out. Next day, after I said all my tearful goodbyes to my family, we boarded a train for the recruitment camp. When we arrived we soon realised that it was not as great as we all expected it to be. Not only there was very little water but the water was very filthy and even worst there were not enough tents for all of us. ...read more.

Secondly, Sir Arthur Curry and the allies built a fake ridge in a rearward area, an exact copy of the one at Vimy, including an identical maze of caves and tunnels. Then from there all the Canadian tropes had to practice for the battle day-in and day-out nonstop for the next two month until we all memorized our roles. Finally on the morning of April 9th the attack began at 5:30 a.m. with the roar of artillery fire. The infantry marched behind, doing the Vimy Glide - a 100-yard advance every three minutes, protected by a curtain of artillery fire. They moved along increasingly dangerous terrain, then Shoulder to shoulder, we advanced up the ridge. We fought through three lines of trenches, until they reached the top. Four days later we had captured all of Vimy Ridge. The only bad part about this battle was before Sir Arthur Curry's plan; we had to fight trench warfare. Trench warfare is when we dig a trench in the ground and face our enemies and the enemies would do the same thing, I didn't really like the trenches in fact I hated them and the conditions of living in them. ...read more.

One of the worst scene was when we were in the trench and the officer blow the whistle, then you have to run across no-man's land knowing that the enemy will shot you down at any moment, but as you turn your head, you see your friend getting shot and you can't do anything about it.we never slept at night because of the noise of the guns and the screams of those who had been wounded and were dying. One good thing I remember was after we captured Vimy Ridge and the enemy retreated. The look of joy and relief on all our faces was something I shall never forget. That night the guns were silent and we slept well, something we had not done in a long while. After everything that has happened I would never have joined up if I had known what it was going to be like. And if I was ever given a chance to talk to every young Canadian man and woman I would say NO don't ever volunteer to fight in any war, Don't believe anyone who tells you that war is a great experience, it will leave you with unforgettable scared for the rest of your life. ...read more.