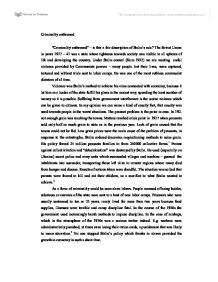 Criminality enthroned is this a fair description of Stalins rule

Criminality enthroned "Criminality enthroned" - is this a fair description of Stalin's rule? The Soviet Union in years 1917 - 41 was a state where tightness towards society was visible in all spheres of life and developing the country. Under Stalin control (from 1922) we are meeting awful violence provided by Communists powers - many people lost their lives, were captured, tortured and without trials sent to labor camps. He was one of the most ruthless communist dictators of all time. Violence was Stalin's method to achieve his aims connected with economy, because it let him as a leader of the state fulfill his plans in the easiest way, spending the least number of money as it is possible. Suffering from government interference is the worse violence which can be given to citizens. In my opinion we can name a kind of cruelty fact, that cruelty was used towards people in the worst situations. The peasant problem is the point in case. In 192. ...read more.

Because of violence Stalin was able to make use of this power to consolidate his control at the top of the party structure. In the first year of ruling Stalin expelled Trotsky from the party and deported from Russia. Stalin then hired some assassins who found Trotsky in Mexico City in 1940 and murdered him with an ice pick. He, starting from 1934, began to systematic terrorizing of colleagues and Party members. Criminality was his tool to keep the power. Anyone considered a threat to Stalin's authority was destroyed. In 1933-4 nearly one million Party members were purged. The purges rarely involved imprisonment or execution. Stalin still felt that people were going against him. In the Great Purge, Stalin went after and killed anyone that proposed any kind of threat to him. In the end, almost 800,000 people were killed.4 The next clear evidence was the fact of show trials. In August 1936 Kamenev and Zinoviev and 14 others were put on public trial charged into involvement in Kirov's murder and with conspiring against the government. ...read more.