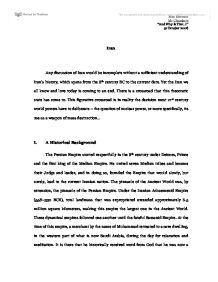 Iran Any discussion of Iran would be incomplete without a sufficient understanding of Iran's history, which spans from the 8th century BC to the current date. Yet the Iran we all know and love today is coming to an end. There is a crossroad that this theocratic state has come to. This figurative crossroad is in reality the decision most 21st century world powers have to deliberate - the question of nuclear power, or more specifically, its use as a weapon of mass destruction... I. A Historical Background The Persian Empire started respectfully in the 8th century under Deioces, Prince and the first king of the Median Empire. He united seven Median tribes and became their Judge and leader, and in doing so, founded the Empire that would slowly, but surely, lead to the current Iranian nation. The pinnacle of the Ancient World was, by extension, the pinnacle of the Persian Empire. Under the Iranian Achaemenid Empire (558-330 BCE), total landmass that was expropriated exceeded approximately 6.5 million square kilometers, making this empire the largest one in the Ancient World. These dynastical empires followed one another until the fateful Sassanid Empire. At the time of this empire, a merchant by the name of Muhammad retreated to a cave dwelling, in the western part of what is now Saudi Arabia, during the day for relaxation and meditation. ...read more.

The sentiment of democracy was strong, especially with the Cold War propaganda of anti-communism, pro-democracy, which resonated in the United States during the Iranian referendum. This voter attitude led to Carter's harsh and strict sanction on the Shah - no killing political dissidents. So for the Shah' intense loyalty to the American Government, he was rewarded with no help from the United States during the Islamic Revolution, and a condemnation on his own reaction. III. The Political, Economic, and Military Goals of the Islamic Republic The chief aspiration of the Islamic Republic is the ultimate increase of Islam to every person in the world. It is not very politely stated in the constitution and the Qur'an that this spread of religion has to happen, otherwise Allah will punish them. In fact, recent earthquakes and natural disasters are interpreted by Muslims as a sign of God's impatience. Another main goal of Iran is the eventual destruction of the United States and Israel, although this objective is not so publicly discussed, at least not at a political level. There is no real economic goal other than to support the religious goal of a 100% Islamic world. This happens to happily coincide with Iran's incredible oil supply. It is standard for about a third of Iran's GDP to come from the production, refinement, and distribution of oil to other countries. ...read more.

Because if a nuclear weapon is delivered to the United States, then there might not be a United States with which to retaliate with. Serious funding has to go into identifying what exactly is happening at the nuclear facility at Natanz, and any other nuclear research facilities anywhere in Iran. After ascertaining if these research plants are strictly civilian or not, then the Western world should act appropriately. If a nuclear weapon is found to be in development, then the next president should green light Israel to attack the Natanz facility, with as minimal damage to civilian life and/or property as possible. After said facilities are destroyed, serious, stern, and grave sanctions must be placed on Iran - if nuclear weapons are found again at anytime, anywhere inside your borders, then we view it as an act of war, and will protect ourselves accordingly. We must back and support Israel in this strike on Iran, otherwise an otherwise unified front against Iran would have cracks that could be exploited. Because if nuclear weapons are found, this will be the second time in less than a decade, against numerous treaties and resolutions and sanctions, that Iran broke the trust of the world in regards to nuclear weaponry. It simply cannot be tolerated, because if it is, then what is stop any country from doing anything that they desire? ?? ?? ?? ?? Max Efremov Mr Chambers "And Why Is That..?" 31 October 2008 ...read more.