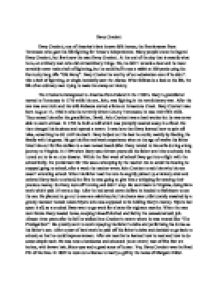 Davy Crockett, one of Americas best known folk heroes, the frontiersman from Tennessee who gave his life fighting for Texass independence.

Davy Crockett Davy Crockett, one of America's best known folk heroes, the frontiersman from Tennessee who gave his life fighting for Texas's independence. Many people know the legend Davy Crockett, but few know the man Davy Crockett. At the end of the day that is exactly what he is, an ordinary man who did extraordinary things. No, he didn't wrestle a bear and he most certainly never rode a bolt of lightning, but he could bull's-eye a rabbit at 300 yards using his Kentucky long rifle "Old Betsy". Davy Crockett is worthy of our admiration even if he didn't ride a bolt of lightning, or single-handedly save the Alamo. What follows is a look at his life, the life of an ordinary man trying to make his stamp on history. The Crocketts immigrated to America from Ireland in the 1700's. Davy's grandfather moved to Tennessee in 1776 while his son, John, was fighting in the revolutionary war. After the war was over John and his wife Rebecca started a farm on Limestone Creek. Davy Crockett was born August 17, 1786 in what is currently Green County Tennessee; he was their fifth child. They named him after his grandfather, David. John Crockett was a hard worker but he was never able to catch a break. ...read more.

They fired the Creek tribe up and sent them off to raid and massacre. One day in August the Creeks surprised the guards at Fort Mims and slaughtered over five hundred men, women, and children. Incensed by this Davy went and joined the Tennessee mounted militia. He served for 90 days and was released on Christmas Eve with a pay of sixty nine dollars and ninety five cents. Having tasted the glory of battle Davy was eager for more so in 1814 he signed up for a six month tour of duty, ignoring his wife's plea to stay at home. In February 1815 Davy got news that Polly was sick, so he raced home to find her burning with fever. She died a few weeks later, leaving him heartbroken with three young children. The army called him back to duty but he refused to abandon his children, so he paid a young man to take his place. He remarried that summer to a widow by the name of Elizabeth Patton. She had two children, a 200 acre farm, and eight hundred dollars in her pocket. After his marriage and move to Shoal Creek, Davy started to earn a lot of respect: he constructed a gristmill and produced cornmeal and whiskey, and then he opened a gunpowder factory that produced some of the finest gunpowder around. ...read more.

Every day the ramparts were bombarded with cannon fire, and each night the cannons were moved closer. On March 5th-6th the cannons were silent, and then in the early morning of March 6th the assault began. The Mexican army charged two times, and two times they were repelled. But on the third charge, spurred on by their commanders, the Mexican army wouldn't give up. They breached the Alamo and slaughtered all of the defenders; the battle lasted 90 minutes. During the fight Davy was a frenzied fighter and a beacon for hope. When the walls were breached and the defenders retreated Davy stayed to defend the low wall, the weakest point. Davy and his men fought with a fury that few have ever matched. They used their guns like clubs, beating back the Mexicans. They were pushed all the way back into the barracks where, as legend has it, Davy was the final fighter, finally overcome by a bayonet charge. Some claim the bodies of no less than twenty Mexican soldiers surrounded him, and so ended Davy Crockett, King of The Wild Frontier. Davy Crockett is an important icon in American history for his pioneering efforts in American politics and for demonstrating how an "everyman" can do amazing things. While Davy may have failed in the respect of getting none of his bills passed, he demonstrated that even a country bumpkin can run for congress and win. You don't have to be a wealthy man; you just have to be you. ...read more.