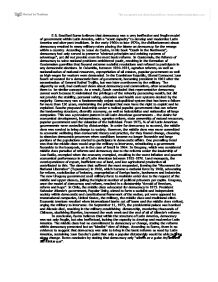 E.B. Bradford Burns believes that democracy was a very ineffective and fragile model of government within Latin America, with a "scant capacity" to develop and modernize Latin America and alter past traditions. In the early 1960s to late 1970s, the disillusionment about democracy resulted in many military rulers placing the blame on democracy for the wrongs within a country. According to Josue de Castro, in his book "Death in the Northwest", democracy had only served to preserve "abstract principles and existing systems of advantage", yet did not provide even the most basic reforms. In Guatemala, the failures of democracy to solve national problems embittered youth, resulting in the formation of Guatemalan guerrillas that favored extreme socialist revolutions and refused to participate in any democratic elections. In Colombia, between 1930-1931, agrarian reforms, as well as nationalization of national resources, expropriation of all estates, popular government as well as high wages for workers were demanded. ...read more.

This was a prevalent pattern in all Latin American governments - the desire for economical development, independence, agrarian reform, state ownership of natural resources, popular government and the valuation of the individual. From 1975, 3/4 of all Latin American governments were controlled by dictatorships. In order for democracy to succeed, the middle class was needed to bring change to society. However, the middle class was more committed to economic wellbeing than democratic theory and practice, for they feared change, choosing to abandon democratic processes when conditions became no longer favorable and large portions of the populations started to participate in democratic affairs. One prevailing trend was that the middle class would urge the military to intervene, reinstituting a government favorable to the bourgeois, as in the case of Brazil in 1964. In Uruguay, which was considered middle class paradise of reforms and democracy due to the reforms under the leadership of Jose Batlle, crumpled when the economy crumpled, resulting in the worst inflation and poorest economical performance in all of Latin American between 1955-1970. ...read more.

Economic tensions resulted when international banks cut off loans and the middle class striked, urging the military to intervene. On September 11, 1973, the presidential palace was bombed and Allende died, resulting in the military establishing dictatorship, murdering thousands of Chileans, abolishing liberties, increased the work week and the end of all of Allende's reforms. In conclusion, Burns believes that within the structure of Latin America, democracy was not only fragile, but also ineffectual, lacking the capacity to develop and modernize Latin America. The middle class had no commitment to democracy or change, stating the reforms within democracy presented but an "idealist" view of things. According to Burns, there is no evidence to suggest that democracy was able to bring in the basic reforms so need by Latin America, sustaining Juan Bosche's point that only a popular dictatorship would be able to bring along change. Burns concludes by stating that democracy only "serves as a guise to preserve the status quo". ...read more.