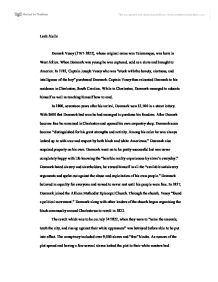 Denmark Vessey . Denmark Vesey became an important figure for African Americans and a symbol of the militant resistance to slavery.

Leah Aiello Demark Vesey (1767-1822), whose original name was Telemanque, was born in West Africa. When Denmark was young he was captured, sold as a slave and brought to America. In 1781, Captain Joseph Vesey who was "stuck with the beauty, alertness, and intelligence of the boy" purchased Denmark. Captain Vesey then relocated Denmark to his residence in Charleston, South Carolina. While in Charleston, Denmark managed to educate himself as well as teaching himself how to read. In 1800, seventeen years after his arrival, Denmark won $1,500 in a street lottery. With $600 that Denmark had won he had managed to purchase his freedom. After Demark become free he remained in Charleston and opened his own carpentry shop. ...read more.

In 1817, Denmark joined the African Methodist Episcopal Church. Through the church, Vesey "found a political movement." Denmark along with other leaders of the church began organizing the black community around Charlestown to revolt in 1822. The revolt which was to be on July 14,1822, when they were to "seize the arsenals, torch the city, and rise up against their white oppressors" was betrayed before able to be put into effect. The conspiracy included over 9,000 slaves and "free" blacks. As rumors of the plot spread and having a few several slaves leaked the plot to their white masters had changed the plans. Leaders of the plot were then rounded up and the consequence for Denmark's actions resulted in him being captured on June 22. ...read more.

Denmark showed southern people that the possibility of revolting is definitely possible even though It did not necessarily work this time. It showed that the slaves are capable of uniting together to try and make a statement and end something they think is wrong. The Judgment of Sterling Stucky remains valid: "Vesey's example must be regarded as one of the most courageous ever to threaten the racist foundations of America... He stands today, as he stood yesterday.. as an awesome projection of the possibilities for militant action on the part of people who have for centuries been made to bow down in fear." Word Count: 531 1. "Denmark Vesey." Encyclopedia of World Biography, 2nd ed. 17Vols. Gale Research, 1998. Reproduced in History Resource Center. Farmington Hills, MI:Gale. http://galenet.galegroup.com/servlet/histRC/ 2. Marck T. John About Famous People. 2009 Sept. www.aboutfamouspeople.com/article1189.html ...read more.