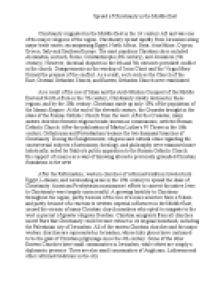 Describe the Spread of Christianity in the Middle East

﻿Spread of Christianity in the Middle East Christianity originated in the Middle East in the 1st century AD and was one of the major religions of the region. Christianity spread rapidly from Jerusalem along major trade routes, encompassing Egypt, North Africa, Syria, Asia Minor, Cyprus, Greece, Italy and Southern Europe. The most populous Christian cities included Alexandria, Antioch, Rome, Constantinople (4th century), and Jerusalem (5th century). However, doctrinal disputes in the 4th and 5th centuries provoked conflict in the church. Disagreements on the worship of Jesus Christ and the Virgin Mary formed the premise of the conflict. ...read more.

Christian emigrants from all churches raised fears that Christianity could become extinct in its original homeland, including the Palestinian city of Jerusalem. All of the eastern Christian churches and the major western churches are represented in Jerusalem, whose holy places have continued to be the goal of Christian pilgrimage since the 4th century. Some of the other Eastern Churches have small communities in Jerusalem, while others are simply a diplomatic presence. There are also small communities of Anglicans, Lutherans and other reformed traditions in the city. ...read more.