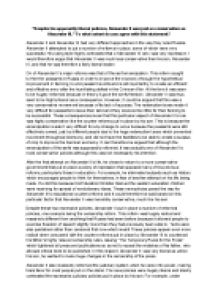 Despite his apparently liberal policies, Alexander II was just as conservative as Alexander III. To what extent do you agree with this statement?

﻿?Despite his apparently liberal policies, Alexander II was just as conservative as Alexander III.? To what extent do you agree with this statement? Alexander II and Alexander III had very different approaches in the way they ruled Russia. Alexander II attempted to put a number of reforms in place, some of which were very successful. His ruling style highly contrasted that of Alexander III who was very repressive. I would therefore argue that Alexander II was much less conservative than his son, Alexander III, and that he was therefore a fairly liberal leader. On of Alexander II?s major reforms was that of the serf emancipation. This reform sought to free the peasants in Russia in order to improve the economy through the hypothetical improvement in farming, to end peasant revolts and most importantly, to create an efficient and effective army after the humiliating defeat in the Crimean War. At the time it was seen to be hugely reformist because in theory it gave the serfs freedom. ...read more.

After the first attempt on Alexander II?s life, he chose to return to a more conservative government that put in place a policy of repression that opposed many of his previous reforms, particularly those in education. For example, he eliminated subjects such as History which encouraged people to think for themselves, in fear of another attempt on his life being made. He did this because his Education Minister blamed the western education children were receiving for spread of revolutionary ideas, These new policies paved the way for Alexander III?s educational counter-reforms and it could therefore be said based on this particular factor that Alexander II was incredibly conservative, much like his son. Despite these two repressive policies, Alexander II put in place a number of reformist policies, one example being the censorship reform. This reform was hugely radical and massively different from anything that Russia had seen before because it allowed people to exercise freedom of speech slightly more than they had previously been able to. ...read more.