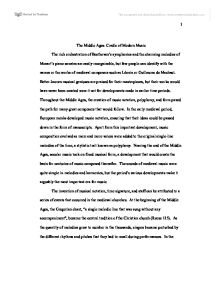 Developments of Music During the Middle Ages

The Middle Ages: Cradle of Modern Music The rich orchestration of Beethoven's symphonies and the charming melodies of Mozart's piano sonatas are easily recognizable, but few people can identify with the names or the works of medieval composers such as L�onin or Guillaume de Machaut. Better-known musical geniuses are praised for their masterpieces, but their works would have never been created were it not for developments made in earlier time periods. Throughout the Middle Ages, the creation of music notation, polyphony, and form paved the path for many great composers that would follow. In the early medieval period, European monks developed music notation, ensuring that their ideas could be passed down in the form of manuscripts. Apart from this important development, music composition evolved as more and more voices were added to the original single-line melodies of the time, a stylistic trait known as polyphony. Nearing the end of the Middle Ages, secular music took on fixed musical form, a development that would create the basis for centuries of music composed thereafter. The sounds of medieval music were quite simple in melodies and harmonies, but the period's various developments make it arguably the most important era for music. ...read more.

After vocal polyphony was established, the same concepts followed in the musical instruments of the time, creating richer accompaniments and more interesting textures in music. For instance, stringed instruments such as the lute or the viol would be featured in duets or trios as opposed to solos. This became the origin of the string quartets and quintets, an ever-popular genre during the Classical and Romantic periods (Pincherle 77). All in all, composers of medieval era created polyphonic music for voices and instruments, paving the path for all types of music performed in an ensemble. Just as polyphony would influence music in the Classical and Romantic periods, the concept of musical form was widely used in the Baroque and the Classical eras. As aforementioned, sacred music was deep-seated in medieval culture because of the patronage of the powerful Christian Church. However, nearing the end of the Middle Ages, secular music emerged in the courts to find its own place in history. Secular songs were composed by aristocrats, known as troubadours in France and Minnesingers in Germany (Forney and Machlis 348). These composer-poets focused their songs on the lives of the nobles, thus chivalry and courtly love were common themes. ...read more.