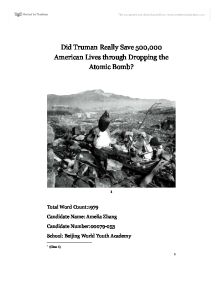 Did Truman really save 500,000 American live through dropping the Hiroshima atomic bomb?

Did Truman Really Save 500,000 American Lives through Dropping the Atomic Bomb? 1 Total Word Count:1979 Candidate Name: Amelia Zhang Candidate Number:00079-053 School: Beijing World Youth Academy Table of Contents A. Plan of Investigation Pg 3 B. Summary of Evidence Pg 4 C. Evaluation of Sources Pg 6 D. Analysis Pg 8 E. Conclusion Pg 11 F. Bibliography Pg 12 G. Appendix Pg 14 Plan of Investigation (Word Count: 135) This investigation will consider neither the motives nor the alternatives to the decision of dropping the atomic bombs, but focus simply on "did the decision to drop the atomic bombs save 500,000 American lives?" as claimed by Truman. To answer this question, I will evaluate the Japanese military situation in the summer of 1945, and casualty estimates for the planned invasion of Operation Downfall through casualty reports, memoranda, intelligence reports, and press documents, supplemented by books written by revisionist and orthodox historians, as well as university lectures, interviews, and documentaries. I will focus particularly on Truman's memoirs because it provides a first hand insight to his thoughts and feelings during presidency in context; as well as the book Hiroshima in History as it is a secondary source written by award winning historians through numerous perspectives. A. Summary of Evidence (Word Count:591) The military situation: After VE day, American allies turned their focus on the termination of the Pacific war. Japan's military capacity was irrevocably destroyed yet showed no willingness to accept the unconditional surrender demanded at Potsdam2. The strategy of naval blockade and strategic bombing undermined Japan's ability to develop a defensive line or conduct further offensive operations3. By September 1944 American forces had taken the Mariana Islands, and were in position near Japan's mainland. Nevertheless, by June 1945 the tremendous casualties of Okinawa, where in 82 days resulted in 72,000 casualties; forced American policy makers to rethink their strategy4. Employed Strategies: By early August, 67 Japanese cities had been heavily bombed, resulting in 500,000 deaths5, and 10 million Japanese refugees.6 The Tokyo ...read more.

Nimitz concluded 49,000, similar to MacArthur's staff's estimate of 50,000 casualties. In short, the casualty estimates for Downfall ranged from 220,000 to 500,000 during the meeting 42. However the July ULTRA interception made a mockery of the lower estimates43. As Drea aptly puts "Japanese reinforcements seemed to blossom with the warm May weather in Kyushu."44 The casualty estimates had to be continually "revised up" as they approached the invasion date45. In Stimson's memo to the president on July 2nd, he argued that an invasion into Japan would result in "an even bitter finish fight than Germany", implying over a million casualties.46 Stimson had been a colonel of artillery during WWI, his point would have not been taken lightly by Truman, and furthermore he was backed by nobel prize winner William Shockley with an estimation of 1,700,000 to 4,000,000 casualties47. In addition Hoover's memorandum submitted upon Truman's request, claims that an invasion would cost 500,000 to 100,000,000 American lives.48 Even Churchill suggested that the bomb could save 1,200,000 lives, among which 1 million American lives49. However Churchill was motivated to convince the U.S to defeat Japan and had the tendency to exaggerate his numbers.50 General Groves even regarded his number "a little high" and suggested slightly under a million51. Yet these high casualty estimates were not limited to the military planners, predictions from the press were equally high. On July 2nd, News Republic claimed that it would cause 500,000 American casualties.52 Life magazine went to the extent of referring to one million53. Similar figures were given by Kyle Palmer from Los Angelus Times54 as well as the magazine Catholic World55. More over, if one considers it from a mathematical standpoint, Okinawa cost 155 soldiers/10sqr miles56, applying only 38% of this rate, an invasion of Japan's mainland would cause 507,280 casualties. Nonetheless revisionist historians have challenged Truman's number, most dominantly Barton J. Bernstein. Basing his argument heavily on MacArthur staff's 2 time estimation of around 100,000 casualties for the opening months of Olympic, contrasting favorably yet erroneously with Truman's casualty estimate of operation Downfall. ...read more.