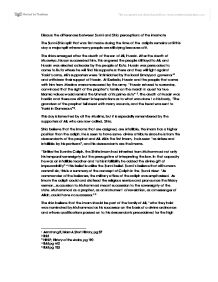 Discuss the differences between Sunni and Shia perceptions of the imamate

Discuss the differences between Sunni and Shia perceptions of the imamate The Sunni-Shia split that was first made during the time of the caliphs remains until this day a major split where many people are still dying because of it. The shias emerged after the death of the son of Ali, Husain. After the death of Muawiya, his son succeeded him, this angered the people still loyal to Ali, and Husain was elected as leader by the people of Kufa. Husain was persuaded to come to Kufa where he will find his supporters there and they will fight against Yazid's army. Ali's supporters were "intimidated by the local Umayyad governor"1 and withdrew their support of Husain. At Kerbela, Husain and the people that came with him from Medina were massacred by the army. "Husain refused to surrender, convinced that the sight of the prophet's family on the march in quest for true Islamic values would remind the Ummah of its prime duty"2. ...read more.

Sunni's believe that all humans commit sin, this is a summary of the concept of Caliph in the Sunni view: "As commander of the believers, the military office of the caliph was emphasised. As Imam the caliph could and did lead the religious service and pronounce the Friday sermon...succussion to Muhammad meant succession to the sovereignty of the state. Muhammad as a prophet, as an instrument of revelation, as a messenger of Allah, could have no successor."5 The shia believe that the imam should be part of the family of Ali, "who they hold was nominated by Muhammad as his successor on the basis of a divine ordinance and whose qualifications passed on to his descendants preordained for the high office by Allah"6, the Imam also had spiritual jurisdiction over the ummah. "The symbol of a divinely guided Imam reflected the shii sense of sacred presence"7 There is also the concept of Mujtahids that the Sunnis and shias disagree on. ...read more.