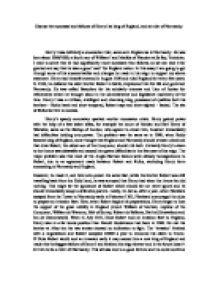 Discuss the successes and failures of Henry I as king of England, and as ruler of Normandy. Henry I was definitely a successive ruler, same as in England as in Normandy. He was born about 1068/1069, a fourth son of William I and Matilda of Flanders at Selby, Yorkshire. I need to admit that he had significantly more successes than failures, so we can take it for granted and say that he was a good 'card' for England nation. In this essay I am going to get through some of his success battles and changes he made in his reign to support my above statement. Henry had himself crowned in August 1100 and ruled England for thirty-five years. In 1106, he defeated his elder brother Robert in battle, imprisoned him for life and governed Normandy. He was called Beauclerc for his scholarly interests and Lion of Justice for refinements which he brought about in the administrative and legislative machinery of the time. Henry I was a ruthless, intelligent and charming king, possessed of qualities both his brothers - Rufus harsh and short-tempered, Robert inept and short-sighted - lacked. The site of Rufus led him to success. ...read more.

Robert realized his brother deadly game, visited England in 1106 to negotiate, but Henry refused and took an army to Tinchebray in Normandy. According to a good contemporary witness, defeated him in only an hour (Douglas and Greenaway 1981:329-30); the imprisonment which followed lasted for twenty-eight years until Robert's death in 1134. This success had wider implications, for it inevitably made Henry into a key figure in the politics of northern Europe, a role which he took on without any hesitation. Throughout the reign it seemed to him quite natural to spend much of his time out of England implementing these wider ambitions. The next success which is attributed to him is his change of government, his new reforms which were very successive and gave England a lot of positives. Henry's efficient - in some sense ruthless - organisation of England administration, was therefore necessary, not only to help finance this policy, but also because he needed a governmental system upon which he could rely when he was away. Under Henry a constitution for the royal household was drawn up, with allowances for authorised officers and departments. It illustrates how well organised and institutionalised the royal household had became. ...read more.

With William's death, Henry's plans for the succession collapsed. This led first to Henry's attempt to produce a new legitimate heir through remarriage and then, when this failed, to his reconstruction of the Angevin alliance through the marriage of Matilda to Geoffrey of Anjou. Henry needed to 'born again' and maintain the peace on his borders. As in 1108, Louise VI became a king of France he flexed his muscles and therefore there was a border confrontations and disputes between Louis and Henry until 1124, when some sorts of least peace was established. Overall Henry was a great ruler and his achievements were successive. He kept thirty-five years peace in England, finally England and Normandy were united, he made legal reforms and financial reforms in government which laid foundations for change throughout the 12thCentury. He settled the Walsh rebellion of his brother's reign and fortified the new borders of Wales with many castles. Although the fact of not having a male heir which leads England to be ruled by Stephen of Blois and as a result of this, everything Henry I had worked for was shattered, and England was plunged into uncertainty, dispute and division for the next nineteen years. ...read more.