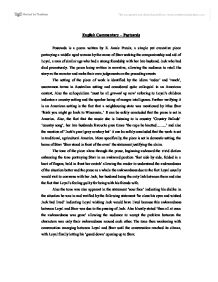 English Commentary - Postcards Postcards is a poem written by E. Annie Proulx, a simple yet evocative piece portraying a middle aged woman by the name of Starr seeking the companionship and aid of Loyal, a man of similar age who had a strong friendship with her late husband, Jack who had died prematurely. The poem being written in narrative, allowing the audience to retell the story as the narrator and make their own judgements on the preceding events The setting of the piece of work is identified by the idiom 'rodeo' and 'ranch', uncommon terms in Australian setting and considered quite colloquial in an American context, Also the colloquialism 'must be all growed up now' referring to Loyal's children indicates a country setting and the speaker being of meagre intelligence. Further verifying it is an American setting is the fact that a neighbouring state was mentioned by Miss Starr 'think you might go back to Wisconsin..' It can be safely concluded that the prose is set in America. Also, the fact that the music she is listening to is country 'Country Ballads' 'country song', her late husbands favourite pass times 'the rope he knotted........' and also the mention of 'Jack's pearl grey cowboy hat' it can be safely concluded that the work is set in traditional, agricultural America. ...read more.

She then begin to converse with Loyal, awkward at the beginning because she starting to move on with her life even though her home is somewhat of a monument to Jack, his belongings everywhere but she did start the conversations getting responses from Loyal indicating his lack of interest but she was ready to move on proven by the statement made later on in the work. The statement 'I could stay on the ranch, Loyal, but not alone. A man is needed' made by Starr is quite clear that she wanted someone to fill in her husbands place and she thought Loyal would fit the bill even though she made it seem as though he would only fulfil an worker position she also indicates that he will also fulfil the role of her companion. The piece ending with Starr giving him Jack's pearl gray cowboy hat, an indication that he will overtake the role of Jack, on what basis not enough information is given to justify a response. Loyal, was the best friend of Starr's late husband Jake, and throughout the piece he refrained from conversing with Starr due to the guilt he felt for being with his friends wife. His characterized as middle aged due to the statement 'think you might go back to Wisconsin, see your kids? ...read more.

The metaphor 'them ties was cut too long ago. With blunt scissors.' Is very effective in portraying the rough relationship Loyal has with his children and depicts Loyal as lonely which cause the reader to feel sympathetic towards him. The poem is structured in forty stanzas, each stanza consisting of five lines. The first two stanzas were disconnected from the rest of the piece which is due to the different time frame, setting, activity and severity of awkwardness. The second stanza is set in the kitchen, while both tried to converse with each other but found it difficult and it was difficult for both parties while in the third stanza, they are both sitting down, eating the quiche and the severity of awkwardness due to their mouths were being preoccupied they weren't expected to speak. There is formal rhyme in the stanzas. In conclusion, the poem Postcards written by E. Annie Proulx, is a very evocative poem with strong diction and sympathetic elements. The process of moving from one relationship to another by Starr, trying to maintain a stable life physically and finically but internally still mourning and lamenting her late husband Jack. The poet effectively uses key character traits of the characters as names to strength the understand of the poem for the reader. Word Count - 1,418 ?? ?? ?? ?? 3 ...read more.