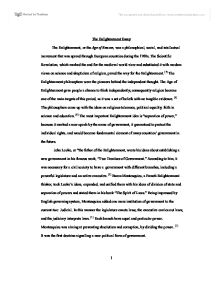 The Enlightenment Essay The Enlightenment, or the Age of Reason, was a philosophical, social, and intellectual movement that was spread through European countries during the 1700s. The Scientific Revolution, which marked the end for the medieval world view and substituted it with modern views on science and skepticism of religion, paved the way for the Enlightenment. [4] The Enlightenment philosophers were the pioneers behind the independent thought. The Age of Enlightenment gave people a chance to think independently; consequently religion became one of the main targets of this period, as it was a set of beliefs with no tangible evidence. [5] The philosophers came up with the ideas on religious tolerance, political equality, faith in science and education. ...read more.

In this manner the legislature enacts laws; the executive carries out laws; and the judiciary interprets laws. [1] Each branch have equal and particular power. Montesquieu was aiming at preventing absolutism and corruption, by dividing the power. [1] It was the first doctrine signalling a new political form of government. Before the Age of Enlightenment the monarch was responsible for the military, the tax collection and the judicial system. [2] People were blinfoldedly devoted to religion. When the Enlightenment began, people could freely think and they became aware of that they actually possess rights. The father of the Enlightenment observed that governments exist to preserve "life, liberty, and property. [8] Then Baron Montesquieu brought forth his separation of powers theory. ...read more.

The executive and legislative branches were to be chosen by people. [1] As a result, the United States of America was the first country to adopt the principles of separation of powers and use it in their newly-established government. In conclusion, the separation of powers predicated humans on and was aiming at to stipulate the rule of law and to guard the human rights. [1] The doctrine laid the groundwork for the present day democratic countries. Many countries throughout the world, following the United States of America, adopted the principles of the separation of powers. Locke and Montesquieu must be having a peaceful sleep in their graves. The two Enlightenment thinkers maybe have not thought that their ideas will be so important, have they? Thank you Locke, thank you Montesquieu... ?? ?? ?? ?? 1 ...read more.