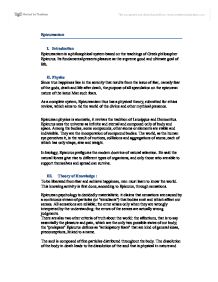 Epicureanism I. Introduction Epicureanism is a philosophical system based on the teachings of Greek philosopher Epicurus. Its fundamental presents pleasure as the supreme good and ultimate goal of life. II. Physics Since true happiness lies in the serenity that results from the issue of fear, namely fear of the gods, death and life after death, the purpose of all speculation on the epicurean nature of the issue Man such fears. As a complete system, Epicureanism thus has a physical theory, submitted for ethics review, which aims to rid the world of the divine and other mythical presence. Epicurean physics is atomistic, it revives the tradition of Leucippus and Democritus. Epicurus sees the universe as infinite and eternal and composed only of body and space. ...read more.

This knowing activity is first done, according to Epicurus, through sensations. Epicurean psychology is decidedly materialistic. it claims that sensations are caused by a continuous stream of particles (or "simulacra") that bodies emit and which affect our senses. All sensations are reliable; the error arises only when they are wrongly interpreted by the understanding: the errors of the senses are actually wrong judgments. There are also two other criteria of truth about the world: the affections, that is to say essentially the pleasure and pain, which are the only two possible states of our body; the "prolepses" Epicurus defines as "anticipatory fears" that are kind of general ideas, preconceptions, linked to a name. The soul is composed of fine particles distributed throughout the body. ...read more.

It is therefore a question for the wise to seek ways to achieve it, so as to live "like a god among men. " Friendship is also a virtue to be cultivated: it is self-serving because it provides pleasure, but it is devoid of any complacency and dullness. Friendship is also preferable to love, which tends to disturb the peace of mind and daily life, as well as the intellectual pleasures will be to focus on sensual pleasures. Epicurean Hedonism teaches that only through self-control, moderation and detachment that one can achieve peace and tranquility. Despite its materialism, the Epicurean doctrine believes in freedom of the will : even atoms are free and, on occasion, they can move themselves. �couter Lire phon�tiquement Dictionnaire - Afficher le dictionnaire V. �couter VI. Lire phon�tiquement VII. VIII. Dictionnaire - Afficher le dictionnaire IX. �couter Lire phon�tiquement Dictionnaire - Afficher le dictionnaire ...read more.