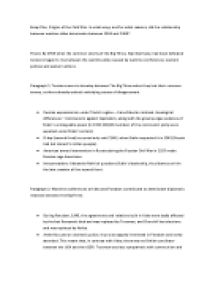 Essay plan-Origins of the Cold War. In what ways, and for what reasons, did the relationship between wartime allies deteriorate between 1945 and 1949?

﻿Essay Plan, Origins of the Cold War. In what ways, and for what reasons, did the relationship between wartime allies deteriorate between 1945 and 1949? Thesis: By 1945 when the common enemy of the Big Three, Nazi Germany, had been defeated tensions began to rise between the wartime allies caused by wartime conferences, western policies and eastern actions. Paragraph 1: Tensions were to develop between The Big Three when they lost their common enemy, as there already existed underlying causes of disagreement. 1. Russian expansionism under Tsarist regime ? trans-Siberian railroad. Ideological differences ? Communism against Capitalism, along with the great purges evidence of Stalin?s unstoppable power (in 1933 400,00 members of the communist party were expelled under Stalin?s orders). ...read more.

Attlee focused on domestic police, thus was vaguely interested in Potsdam and rarely attended. This meant that, in contrast with Yalta, there was no British conciliator between the USA and the USSR. Trueman was less sympathetic with communism and adopted strict and harsh measures with Stalin. 3. Promises broken ? Stalin used the salami tactics in order to support communist government in Eastern Europe. Atomic diplomacy ? the knowledge of an atomic bomb frightened Stalin. 4. Interpretations: John Lewis believed relations worsen during wartime conferences because the weakened French and British forced the USA to intervene in European affairs. Paragraph 3: American and Soviet ultimate policies threatened each other while forcing tensions and deteriorating the diplomatic relations. 1. USA: Marshal Plan ? contributed only in Western Europe with 17,000 dollars worth aids, in order to recover the economy. ...read more.

3. Interpretations: Russian historians argue that the US possessed the best weapon of mass destruction, thus did not need a military alliance. Therefore NATO was created with the sole purpose of building diplomatic and economic relations. Paragraph 4: Soviet actions in Berlin, Berlin Blockade, encouraged distrust between the wartime allies. 1. 1948 to 1949: Marshall Plan worsens the division between East and West Berlin. 2. Berlin Blockade in 1948: Stalin blocked all road, rail and canal connections in West Berlin with the rest of the world. 3. Stalin influenced the formation of a new communist government in Poland, while the legal one was exiled in London. By undertaking Poland, Stalin could make his way through the rest of Europe. 4. Interpretations: Alan Millward believes the Marshall Plan was a strategy used by USA to prove the success of Capitalism around the world. ...read more.