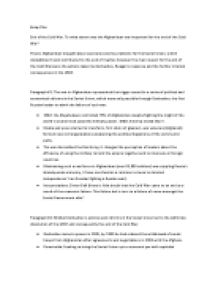 Essay Plan. To what extent was the Afghanistan war important for the end of the Cold War?

﻿Essay Plan End of the Cold War. To what extent was the Afghanistan war important for the end of the Cold War? Thesis: Afghanistan brought about several economic problems for the Soviet Union, which destabilized it and contributed to the end of rivalries however the main reason for the end of the Cold War were the actions taken by Gorbachev, Reagan?s response and the further internal consequences in the USSR. Paragraph #1: The war in Afghanistan represented the trigger cause for a series of political and economical reforms in the Soviet Union, which were only possible through Gorbachev, the first Russian leader to admit the failure of such war. 1. 1982: the Mujahedeen controlled 75% of Afghanistan despite fighting the might of the world?s second most powerful military power. 1980: America ended SALT I. ...read more.

1. Gorbachev came to power in 1985, by 1989 he had ordered the withdrawal of soviet troops from Afghanistan after agreements and negotiations in 1988 with the Afghans. 2. Perestroika: Seeking to bring the Soviet Union up to economic par with capitalist countries such as Germany, Japan, and the U.S., he decentralized economic controls and encouraged enterprises to become self-financing. 3. Glasnost: Soviet policy of open discussion of political and social issues. Glasnost also permitted criticism of government officials and allowed the media freer dissemination of news and information. 4. Gorbachev cancelled the implementation of the Brezhnev doctrine and accepted the dissolution of the Warsaw Pact in 1990. 5. Interpretations: Dimitri Volkogonov: uses the word "paradox" more than any other in his account of Gorbachev in power - the convinced Communist who killed Communism; the Leninist who believed Soviet power could be democratized. ...read more.

Paragraph #4: Gorbachev?s actions and Regan?s responses generated internal pressures among the Soviet bloc and sublevations in countries as Poland which contributed to the end of the cold war. 1. Czechoslovakia rebelled in 1968 against communism and Alexander Dubcek became the leader. This leader began a process of economic and political emancipation called the Prague spring. 2. In April 14th, 1988, the governments of Pakistan and Afghanistan signed an agreement known as the Geneva accords. In was agreed a full withdrawal of Soviets by February 1989. 3. Solidarity reached 9.5 million members. This forced Gorbachev to declare the East European countries free 1988. 4. Historiography: At first the Soviets gave us an ultimatum: either bring the situation under control or we will cut off supplies of oil, gas and other raw materials. We had to convince our allies that we would not undermine the Warsaw Pact or allow the state to be undermined. General Jaruzelski speaking in 1995 ...read more.