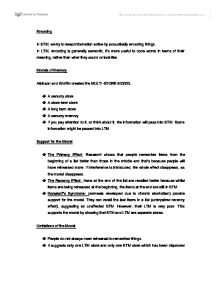 Encoding In STM, we try to keep information active by acoustically encoding things. In LTM, encoding is generally semantic, it's more useful to code words in terms of their meaning, rather than what they sound or look like. Models of Memory Atkinson and Shriffin created the MULTI-STORE MODEL. ==> A sensory store ==> A store-term store ==> A long term store ==> A sensory memory ==> If you pay attention to it, or think about it, the information will pass into STM. Some information might be passed into LTM. Support for the Model ==> The Primacy Effect: Research shows that people remember items from the beginning of a list better than those in the middle and that's because people will have rehearsed more. If interference is introduced, the whole effect disappears, as the model disappears. ==> The Recency Effect: Items at the end of the list are recalled better because whilst items are being rehearsed at the beginning, the items at the end are still in STM. ==> Korsakoff's Syndrome: (amnesia developed due to chronic alcoholism) provide support for the model. They can recall the last items in a list (unimpaired recency effect), suggesting an unaffected STM. However, their LTM is very poor. This supports the model by showing that STM and LTM are separate stores. Limitations of the Model ==> People do not always need rehearsal to remember things. ==> It suggests only one LTM store and only one STM store which has been disproved by other research. ...read more.

6) They also wanted to see whether other factors such as psychiatric symptoms, loneliness and life events were associated with immune function. Procedure: 7) A total of 75 first year medical students, it was a self selected sample. 8) This was a natural experiment because the independent variable, (the level of stress due to the imminence of exams) was naturally occurring. 9) A blood sample was taken a month before their exams (a low stress condition) and also on the first day of their final exams (a high stress condition). 10) The measurement of natural killer cells and T cells was taken as indicators of immune function (the dependant variable). 11) On both occasions, the students were given a questionnaire measuring psychiatric symptoms, loneliness and life events. Findings: 12) Natural killer and T cell activity declined between the low-stress and high stress conditions. Thus, the assumption was correct. 13) The questionnaires revealed that immune system responses were particularly suppressed in participants who reported that they were experiencing psychiatric symptoms, loneliness, or stressful life events. Conclusions: 14) Stress is associated with suppression of the immune system and the effect is stronger when there are more sources of stress. 15) Only associations were established. Implications include the importance of stress management to good immune functioning. Criticisms: 16) The independent variable was not under the control of the experimenter and as a result, cause and effect cannot be inferred as the independent variable is neither controlled or isolated. ...read more.

52) Again, the reports by the personnel managers could have been biased. 53) Cause and effect cannot be made and therefore other factors could be inferred. 54) We simply do not know which of these various factors is more closely linked with heart disease. Friedman and Rosenman Aims: 55) Whether there is a true link between people with Type A personality (highly active, competitive, aggressive, hostile, impatient, fast talking & thinking.) and increases risk of Coronary Heart Disease. Procedures: 56) 3524 Californian men between 39 and 59 who were free of any signs of CHD were sampled. 57) They were studied for 8 1/2 years. 58) They were then examined for signs of CHD at the end of the period. Findings: 59) 7% of the men had signs of CHD. 2/3 of the men had a type A personality. Conclusion: 60) Men with type A personalities tend to have higher blood cholesterol levels and more adrenaline and noradrenaline in their bdies than men with type B personalities. 61) These hormones are released as a part of the stress response. 62) They in turn produce higher levels of fatty acids in the blood. 63) This may lead to Atherosclerosis which is the narrowing of the arteries due to fatty deposits on the artery walls. Criticisms: 64) A possible link between type A personalities and the risk of CHD. 65) The sample was small and male and therefore not an accurate representation of the population. 66) It was a high risk group. 67) All the men were chosen from one place and therefore reduces confounding variables such as culture. 68) It's not replicable. ==> Personality definitions i.e. Type A, is too broad a generalisation. ...read more.