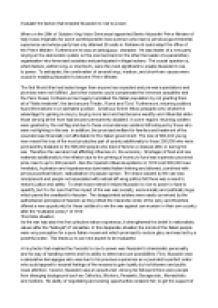 Evaluate the factors that enabled Mussolini to rise to power.

﻿Evaluate the factors that enabled Mussolini to rise to power. When on the 29th of October King Victor Emmanuel appointed Benito Mussolini Prime Minister of Italy it was enigmatic for some contemporaries how a person who had no previous governmental experience and whose party had only attained 35 seats in Parliament could adopt the office of the Prime Minister. Furthermore he was an ambiguous character. He was leader of a new party relying on the democratic system on the one hand and on the other the leader of a paramilitary organisation who terrorised socialists and participated in illegal actions. The crucial question is, which factors, wether long- or short-term, were the most significant to enable Mussolini?s rise to power. To anticipate, the combination of several long-, medium, and short-term causes were crucial in enabling Mussolini to become Prime Minister. The first World War had lasted longer than anyone has expected and pre-war expectations and promises were not fulfilled. Just a few victories could compensate the immense casualties and the Paris Peace Conference has hugely humiliated the Italian population by not granting them all of ?Italia Irredente?, the land around Trieste, Fiume and Tyrol. Furthermore, returning soldiers found themselves in an alienated position. Ambitious former fellow peasants who seized the advantage for gaining money by buying more land and had become wealthy and influential while those serving at the front had become permanently disabled. ...read more.

The ?transformismo? system was based on deals among the ruling liberal politicians. They focused on how to distracted from problems rather than solving them. This was therefore a system of rigidity and very little progression. This government also depended until 1912 on a tiny electorate and its mandate was therefore questionable. This means that the work of the government was rarely agreed with and the list of unresolved problems grew immensely during the period of Liberalism in Italy. Due to tension between the papal states and Italy, the pope called upon the Catholics not to participate in politics until the Populari party was founded after the war. This was a massive problem as it has not been resolved until Mussolini came to power and therefore a huge part of the population was alienated. Moreover, the government failed to introduce a fully functioning welfare system as it could be found in other European states and failed to restore the economy after the war. Another factor that undermined liberal hegemony was the fact that politics polarised. After the Russian revolution Marxist groups were increasing in numbers and riots spread immensely. On the left end of the political spectrum the shift to the extreme had to be compensated by nationalist and fascist organisations on the other. This drew the mass away from central politics. ...read more.

Besides terrorising the 1920 elections the March on Rome was probably their most clear demonstration of their power and willingness to change the current situation. Even though it was relatively unsuccessful as lots of fascists stranded outside Rome, the March on Rome had a visual impact on Italian society and especially on the King as it was in front of his doorstep. But even though he has not initiated the March on Rome, it was Balbo, it clearly favoured his personal reputation. For the Squadristi it seemed like a seizure of power which strengthened the cohesion within the Fascist party. It also seemed to the King, that Mussolini had massive support which was probably the reason for him not ordering the army to crush down the Fascists. The indirect support of the King was crucial to help Mussolini to get attention and gave the impression of a revolution. This leads to ease in his seizure of power. In conclusion, the popular support at that point was relatively unimportant as the 35 seat in Parliament show. The most important figure in order to make him Prime Minister was the King. As Mussolini had managed to integrate Catholics the King sympathised with him. The March on Rome and the seemingly big public support enable Mussolini to move into the focus of King Emanuel. Also the fear of Communism was pressing the King to appoint Mussolini Prime Minister as he seemed able to deal with the Marxist revolutionaries. Laurenz Boss ...read more.