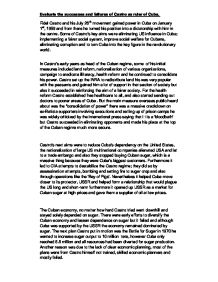 Evaluate the successes and failures of Castro as ruler of Cuba.

Evaluate the successes and failures of Castro as ruler of Cuba. Fidel Castro and his July 26th movement gained power in Cuba on January 1st, 1959 and from there he turned his position into a dictatorship with him in the centre. Some of Castro's key aims were eliminating US influence in Cuba; implementing a fairer social system, improve social welfare for Cubans, eliminating corruption and to turn Cuba into the key figure in the revolutionary world. In Castro's early years as head of the Cuban regime, some of his initial measures included land reform, nationalization of various organizations, campaign to eradicate illiteracy, health reform and he continued to consolidate his power. Castro set up the INRA to redistribute land his was very popular with the peasants and gained him a lot of support in that section of society but also it succeeded in reinforcing the aim of a fairer society. ...read more.

Nevertheless it helped Cuba move closer to its protector, USSR and helped form a relationship that would plague the US long and short-term furthermore it opened up USSR as a market for Cuban sugar at high prices and gave them a supplier of oil at low prices. The Cuban economy, no matter how hard Castro tried went downhill and stayed solely depended on sugar. There were early efforts to diversify the Cuban economy and lessen dependence on sugar but it failed and although Cuba was supported by the USSR the economy remained dominated by sugar. The next plan Castro put in motion was the Battle for Sugar in 1970 he wanted to increase sugar output to 10 million tons, however Cuba only reached 8.5 million and all resources had been diverted for sugar production. Another reason was due to the lack of clear economic planning, most of the plans were from Castro himself not trained, skilled economic planners and mostly failed. ...read more.

Also Cuba suffered energy shortages (gas/water/oil) food and clothes rationing due to this, as it was hard for them to source it as well. But in the 90's there was some return to private trading was allowed and efforts to promote tourism, although this was against Castro's aim of eradicating inequality it was popular among the people and helped to raise living standards. In conclusion, the Castro regime has lasted 5 decades and it is hard to make an overall decision because of this fact. But he has had success and failures at the head of the regime. Some of the outstanding things Castro did were; providing free education and healthcare to all of Cuba, not just the middle and upper classes, support for his Ideals in the third world and the relationship he formed with USSR. However the standard of living in Cuba is still poor, and he nearly brought the world into nuclear war. Fidel Castro was a great leader and he succeeded in much he said he would do. ...read more.