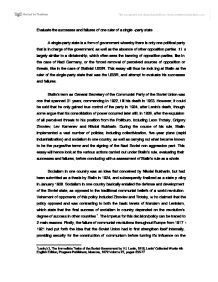 Evaluate the successes and failures of one ruler of a single-party state A single-party state is a form of government whereby there is only one political party that is in charge of the government, as well as the absence of other opposition parties. It is largely similar to a dictatorship, which often sees the banning of opposition parties, like in the case of Nazi Germany, or the forced removal of perceived sources of opposition or threats, like in the case of Stalinist USSR. This essay will thus be looking at Stalin as the ruler of the single-party state that was the USSR, and attempt to evaluate his successes and failures. Stalin's term as General Secretary of the Communist Party of the Soviet Union was one that spanned 31 years, commencing in 1922, till his death in 1953. However, it could be said that he only gained true control of the party in 1924, after Lenin's death, though some argue that his consolidation of power occurred later still, in 1928, after the expulsion of all perceived threats to his position from the Politburo, including Leon Trotsky, Grigory Zinoviev, Lev Kamenev and Nikolai Bukharin. During the course of his rule, Stalin implemented a vast number of policies, including collectivization, five-year plans (rapid industrialization) and socialism in one country, as well as carrying out what became known to be the purges/the terror and the signing of the Nazi Soviet non aggression pact. This essay will hence look at the various actions carried out under Stalin's rule, evaluating their successes and failures, before concluding with a assessment of Stalin's rule as a whole. ...read more.

We must make good this lag in ten years. Either we do it, or they crush us!2". It shows Stalin's desire to catch up with the industrialized West, as well as his fear of being attacked by the West. The Western powers had shown to oppose communism, from their supporting the Whites in the Russian Civil War, to their appeasement of Hitler, which Stalin had perceived as an attempt to gang-up on Russia, and thus depict the premise of which the five-year plans were based on. In the course of the first five-year plan, oil production nearly doubled, from 11.7 million tons to 21.4 million tons, even surpassing the target of 19 million tons! While other industries had failed to meet their targets, they also made tremendously leaps in production, nearly all of the doubling production in a short span of five-years. By 1932, the USSR had surpassed the world manufacturing output share of both Germany and the UK, second only to the US. This was achieved through harsh policies aimed at keeping discipline and very regimented lifestyles, so while there was virtually no unemployment, the quality of life was dismal. Workers also died in the midst of major projects stemming from appalling conditions and safety accidents. The five-year plans and the seemingly miraculous achievements they had made were hence shown to have mastodonic human cost behind them, though all that being said, the modernization that had been brought about by Stalin had saved it from defeat at the hands of Hitler when Hitler invaded in 1941 during the 1941. ...read more.

This weakness when compared to the German therefore precipitated in the huge losses suffered by the Soviets at the start of Operation Barbarossa. Also, within 3 months, the Germans had been able to push to within 90 miles of Moscow, due to the inefficacy of the Russian army despite their superior technological numbers. The German army was eventually slowed greatly by the onset of Russian winter, which gave Russia a chance to consolidate it's forces and launch a counter-offensive. Thus Stalin's purges had greatly reduced the Red Army's ability to repel the German offensive, which could hence be taken as a failure. In conclusion, one can see how through the carrying out and implementation of various policies and actions undertaken, Stalin had his share of hits and misses, with some succeeding and others failing. Successes include his five-year plans, usage of propaganda and socialism in one country, while failures include collectivization and the purges. Though Stalin brought about large social and human costs, he had also aided the developments and betterment of Russia, elevating it to the status of a world superpower, leading me to say that Stalin, as a ruler, had more successes than failures. 1Lenin,V.I, The Immediate Tasks of the Soviet Government by V.I. Lenin, 1918, Lenin' Collected Works 4th English Edition, Progress Publishers, Moscow, 1972 Volume 27, pages 235-77 2 http://www.geocities.com/CapitolHill/Embassy/7557/bio.html 3 Fainsod, Merle, How Russia is Ruled, Cambridge: Harvard University Press, 1965, p. 541 4 Rappaport, Helen, Joseph Stalin: A Biographical Companion, ABC-CLIO, 1999,p. 53 ...read more.