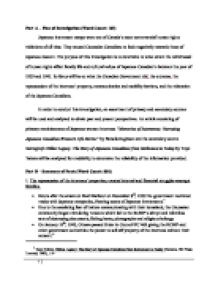 Evaluating the effect of Cnadian internment camps for those of Japanese descent during WW2.

Part A - Plan of Investigation (Word Count: 167) Japanese internment camps were one of Canada's most controversial human rights violations of all time. They caused Caucasian Canadians to look negatively towards those of Japanese descent. The purpose of this investigation is to determine to what extent the withdrawal of human rights affect family life and cultural values of Japanese Canadian's between the year of 1939 and 1945. Its focus will be on what the Canadian Government did, the outcome, the repossession of the internees' property, communication and mobility barriers, and the relocation of the Japanese Canadians. In order to conduct this investigation, an assortment of primary and secondary sources will be used and analyzed to obtain past and present perspectives. An article consisting of primary reminiscences of Japanese women internees "Memories of Internment: Narrating Japanese Canadian Women's Life Stories" by Pamela Sugiman and the secondary source monograph Nikkei Legacy: The Story of Japanese Canadians from Settlement to Today by Toyo Takata will be analyzed for credibility to determine the reliability of the information provided. Part B - Summary of Facts (Word Count: 854) 1. The repossession of the internees' properties, created internal and financial struggles amongst families. * Hours after the attack on Pearl Harbour on December 8th, 1939 the government restricted trades with Japanese companies, freezing assets of Japanese investments.1 * Due to the escalating fear of traitors communicating with their homeland, the Caucasian community began circulating rumours which led to the RCMP's abrupt and relentless acts of destroying documents, fishing boats, photographs and religious belongs. ...read more.

He experienced the appalling conditions of Japanese internment camps firsthand as a child. After two years in a camp located in British Columbia, he relocated to Toronto and became the English editor of The New Canadian. He became an icon for the Japanese-Canadian community for creating the Japanese Canadian Centennial in 1977. It was published in 1983 in Toronto by NC Press Limited. Takata's purpose for writing this monograph is to break the silence of many Japanese internees' and to expose the abuse and human rights violation they endured. This secondary source is valuable to the investigation because it involves the extensive research of primary sources conducted by the author in order to capture all opinions into one source. It is organized into many chapters, which easily enables the reader to comprehend each concept. The limitation of the source is it does not allow the reader to get a quick overview of Japanese internment camps because of the detail given on each event. 2. . The article "Memories of Internment: Narrating Japanese Canadian Women's Life Stories" was written by Pamela Sugiman, a historian who earned her PhD in Sociology at the University of Toronto. She published many articles in a variety of Canadian journals, and is a professor at McMaster and Ryerson University. The article was published in 2004, in the Canadian Journal of Sociology; Vol.29, No. 3. The purpose of this article is to offer a primary viewpoint of internment camps and how women felt about the circumstances. ...read more.

Although there was no distinct evidence for the traitorous behaviour from the Japanese, the government was still legally able to withhold the Japanese Canadians before proving their guilt. Documents revealed that within the entire seven years of the entire seven years of exile, Japanese Canadians have not left a trace of evidence which holds themselves guilty for any type of traitorous activity nor behaviour.23 In addition, Japanese Canadians were only able to reside in boundaries the government approved.24 The requirement to ask for approval in order to go anywhere, is the basis foundation of freedom, however, the Japanese Canadians were stripped of this freedom. In spite of what the dominant Caucasian population thought at the time the denial of an individual's human rights is not a point of "merit" but "demerit." Part E - Conclusion (Word Count: 90) Throughout the development of Canada's political system there have been many negative influences on certain ethnicities based on international impacts such as imperialism. The Japanese were treated irrationally and unjust, dramatically crippled the culture of Japanese-Canadians by their separation from family, possessions and their familiar surroundings. Withdrawal from family influences causes an individual to lose connections with direct ties to ones culture and moralistic outlooks. Furthermore without the presence of these possessions, and direct family members, the alienation overcomes the individual and ruined the cultural values and family lives of a large number of Japanese citizens. ...read more.