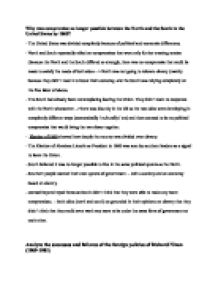 Exam Prep US History - Nixon's Foreign Policy, Start of US Civil War and the Imortance of the Railroads

Why was compromise no longer possible between the North and the South in the United States by 1860? - The United States was divided completely because of political and economic differences. - North and South repeatedly relied on compromises that were only further creating tension (because the North and the South differed so strongly, there was no compromise that could be made to satisfy the needs of both sides --> North was not going to tolerate slavery (mainly because they didn't need it to boost their economy, and the South was relying completely on the free labor of slaves. - The South had already been contemplating leaving the Union. They didn't want to cooperate with the North whatsoever -->there was disunity in the US as the two sides were developing in completely different ways (economically / culturally / etc) and there seemed to be no political compromise that would bring the two closer together. - Election of 1860 showed how deeply the country was divided over slavery. - The Election of Abraham Lincoln as President in 1860 was seen by southern leaders as a signal to leave the Union. - South believed it was no longer possible to live in the same political system as the North. - Southern people wanted their own system of government -- with a society and an economy based on slavery. ...read more.

- CIA creates chaos in countries (communist countries) -- disorder allows for the military to step in. - Making it appear as though the person in charge is not in control of the situation (showing communist rulers do not have the ability to maintain order) - Russians were paying to support Cuba, and were unimpressed - Military officers took to the streets in an attempted coup -- after revolts in Chile - Allende responded by placing greater reliance on the military - People went hungry (shops closed) Middle class housewives banged their pots in the streets in protests (sounds sexual) - Planes were sending bombs into Chilean houses and buildings (Allende broadcasting saying Viva Chile - securing his faith in Chile) --> that day, Allende died - Nixon's foreign policy --> period of "cooling off" / thawing tensions between the 2 major super powers in the cold war - US public was hoping for "d�tente" to work -- in hopes that the war would "cool off" (the war was out of hand) - People also hoping for d�tente because of the Cuban Missile Crisis (people stressed over potential nuclear war) --> hoping for an actual dialogue about mutual problems. - 1972 Nixon embarked on a trip "symbolizing d�tente" in China (communist) - historic opening in the cold war (Nixon and Ho Chi Minh made progress towards solving their problems in the cold war) ...read more.

- Railroads allowed for the Northern economy to flourish --> goods were being transported easily in the North. - It added to the north's manufacturing capabilities--> The North had an advantage over the South also because the North was able to transport goods and arms around the North and mass produce weapons in their factories (which would help with the war) - In order to feed hungry soldiers in the North (during the civil war) the North was able to ship supplies easily around the North. - Northern territory held advanced highways and railroads which increased their ability to transport weapons and supplies easier. (saying the same thing over and overrr agaiinn) - All of the investor's money put towards the railway system, reaped an abundance of profits, and they continued to invest in the railroads. - The building of railroads not only stimulated the economy through an abundance of profits, but it also managed to urbanize American cities - The railroad also altered manufacturing by driving down the cost of transported manufactured parts; thus transportation allowed local manufacturers to produce higher quality goods. - With all of these immediate benefits from the railroad system, manufacturers benefitted the most, and thus stimulated the economy the most. - Railroads provided a greater market for goods, both agricultural and industrial; they connected all ends of the country, allowing for more widespread business and horizontal and vertical integration with Carnegie and Standard Oil, since materials could come from further away. Building the railroads provided jobs. ...read more.