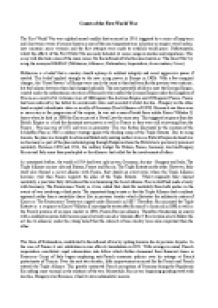 Examine the Main Causes of the First World War

﻿Causes of the First World War The First World War was a global armed conflict that occurred in 1914, triggered by a series of long term and short term events it became known as one of the most important wars in history as empires were broken, new countries arose victories and the first attempts were made to establish world peace. Unfortunately, whilst the affects of the First World War are rarely debated, its causes range in number and importance. [a]This essay will illustrate some of the main causes for the outbreak of what became known as ?The Great War? by [b]using the acronym MANIAC (Militarism, Alliances, Nationalism, Imperialism, Assassination, Crises).[c] Militarism is a belief that a country should upkeep its militant integrity and assert aggressive power if needed. This belief applied strongly to the new rising power in Europe in 1900s. With a few marginal changes, the ?Great Powers? of Europe were much the same as they had been for the previous two centuries, but the balance between them had changed radically. The most powerful of all was now the German Empire, created under the authoritarian structure of Bismarck who unified the German Empire under the Kingdom of Prussia as a result of its victorious wars of 1866 against the Austrian Empire and 1870 against France. ...read more.

This form of Nationalism, contributed to the outbreak of war by spiking tensions due to previous disputes. In the case of France it saw retribution in war after its humiliation in 1871. With revenge in mind, French imperialism constituted rapid colonisation into Africa which further demeaned their financial stance as Francesco Crispi of Italy began employing anti-French economic policies over his outrage at French protectorate of Tunisia. Over the next two decades, little improvement occurred for the French and French entered the Triple Alliance. This greatly contrasted French occupation of Germany during the Napoleonic Era adding more turmoil in the relations of the two. Meanwhile, Russia was beginning grinding teeth with Austria- Hungary over Bosnia as it had its own nationalistic reasons. There were three major crises that contributed to the ?Great War?. The First Balkan Crisis of 1908 began with Austria-Hungary's annexation of Bosnia as Bosnia was trying to expand their territory into the Balkans. Thereby involving Serbia who wanted Bosnia to become part of a 'Greater Serbia' and Russia who too considered itself the protector of Slavic people. However both had to back down when Germany backed up Austria-Hungary, in accordance to the Triple Alliance of 1882 as Germany's army was far superior. ...read more.

Japan follows honouring a military agreement with Britain and Italy although allied to both Germany and Austria - Hungary evades war until 1915 claiming that the war against Germany is not ?defensive? meaning it cant intervene but eventually joins the conflict siding with the enemies of her two former allies. By the time the First World War ended in 1918, eight million people had died in what had been perhaps the most apocalyptic episode the world had known. The main causes often summarised by the acronym MANIAC - Militarism, Alliances, Nationalism, Imperialism, Assassination, Crises demonstrate how the actions of each power contributed to the war.[d] From Germany?s rapid growth that frightened the balance to French bitterness to Russian and Serbian nationalism to crises and the one that triggered it all the assignation of Franz Ferdinand as well as the alliances that condemned militaristic response. Whilst opinions vary on the most important causes it is clear that the events that occurred in 1914 had been so intertwined that each cause contributed to another. [e] [a]Mr. Barnett in Particular prefers introductions to be three lines long without any flowery language [b]Some teachers dont require this (Mr.Barnett) [c]Dont use acronyms [d]Again use of acronym [e]Made a comment ...read more.