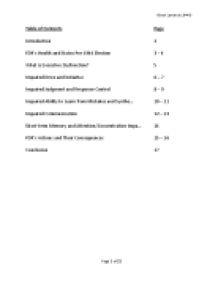 ﻿Ethan Landrum; 0442- Table of Contents Page Introduction 2 FDR?s Health and Status Pre-1944 Election 3 ? 4 What is Executive Dysfunction? 5 Impaired Drive and Initiative 6 ? 7 Impaired Judgment and Response Control 8 ? 9 Impaired Ability to Learn from Mistakes and Synthe? 10 ? 11 Impaired Communication 12 ? 13 Short-term Memory and Attention/Concentration Impa? 14 FDR?s Actions and Their Consequences 15 ? 16 Conclusion 17 Introduction The Yalta Conference was the most pivotal point in FDR?s fourth term. He had not lived to see the end of the war, but he had lived long enough to participate, for a second time, at a conference with two other world leaders. Here at the Yalta Conference (or Crimea Conference), the leaders of the United States, the United Kingdom, and the Soviet Union met to discuss geopolitical outcomes of the war. Criticism of Franklin D. Roosevelt for his effectiveness at this political event is both varied and numerous. It was clear to everybody around him that his health was trailing and his energy was lagging, and that illness was upon him many times in his later life. Were Franklin D. Roosevelt?s health conditions during his fourth presidential term consequential enough to render him ineffective executively on a geopolitical scale? Did FDR experience executive dysfunction during his final term, and if so, did it directly affect his presence at the Yalta conference and thus the outcome of history? The President made it very clear to the public that his, and by extensions the United States?, goal at the Conference and beyond was to promote democracy and peaceful diplomacy within Europe. He said in his March 1, 1945 speech to the joint-session of Congress, ?The Crimea Conference was a successful effort by the three leading Nations to find a common ground for peace. It ought to spell the end of the system of unilateral action, the exclusive alliances, the spheres of influence, the balances of power, and all the other expedients that have been tried for centuries?and have always failed? (Roosevelt, 1945). ...read more.

about FDR?s speech: ?He did not speak out as eloquently as Churchill, or as bluntly or cogently as Stalin, but he was generally quick, alert, articulate, and even witty,? and that ?? he handled matters effectively and even skillfully (Burns, 1970).? Anthony Eden, one of Churchill?s advisors, conceded later that Roosevelt?s seeming ill-health did not alter his judgment. He apparently marveled that the President not only kept up with Churchill in the round of formal and informal conferences, but also found time to conduct a whole separate enterprise Yalta-negotiations with Stalin over East Asia (Burns, 1970).This juxtaposes the examples of his inappropriate response control, but most would say that the effectiveness itself trumps the way at which it is managed. The evidence of impairment is important to consider when resolving his overall effectiveness, but the fact that he may have been effective is more important. Impaired Ability to Learn from Mistakes and Synthesize Information The most popular consensus among historians is that FDR?s main strategy for persuading Stalin was to ?charm? him into entering the war with Japan (Beichman, 2003; Dobbs 2012; Kennan, 1960). The invasion of Japan by the Soviet Union was pivotal for a victory in the Pacific, and was necessary in order to save millions of American lives. This feat - it certainly wasn?t an easy task ? may have been slightly possible if FDR were in his political prime; most people believed that to be in the first 100 days of his first term (Kennedy, 1999). However, Roosevelt was apparently not in the physical or mental condition to be trying to ?charm? a man of Stalin?s stature, and FDR?s associates warned him of this (Bohlen, 1973). Roosevelt was well informed by the State Department of Stalin?s purges for his own self-gain; purges which had exterminated millions of his own people and led to the total annihilation of his country?s first parliament (Fleming, 2001; Bohlen, 1973; Perisco, 2001). ...read more.

This assistance was necessary at times during the war, but what raises question is that the aid never stopped after the constant violations of protocol by Stalin (Dear & Foot, 1995; Haynes & Klehr, 2000). FDR?s silence or perhaps negligence toward the issue allowed for the Soviet Union to become more aggressive with military expansion, and expand Communist forces at the expense of Eastern Europe and the Baltic States; this could be the direct result of Roosevelt?s impaired judgment, response control, or attention. Conclusion When looking at his entire presidency, Franklin Roosevelt was a mighty and wholehearted President, who facilitated momentous progress for the United States. However, in speculating the man?s illness and its effect on his function in his final year of life, one cannot disregard that it hindered his performance. Personal accounts and historical documents will always disagree and will always hold some degree of bias, but, upon analyzing this President?s actions and their consequences, the consensus is clear: his trailing health was clearly evident, and it hindered his effectiveness. That?s not to say that his presidency or his actions were complete failures, but rather to suggest that more success could have been achieved ? were it not for the circumstance of his medical and mental conditions. The President experienced hypertension, heart failure, bronchitis and fatigue. Although those close to him expressed a lack of knowledge of his illness, evidence exists that places the President?s health at a dangerous level. The President displayed evidence of executive dysfunction in multiple ways. Numerous personal accounts and memoirs link FDR?s weary appearance to declining initiative, drive, and energy. Examples of the President?s impairments are compelling and reveal that his effectiveness in his fourth term of Presidency was inadequate. Because of this executive dysfunction, Roosevelt?s appearance on the world stage was affected; his interactions with the Soviet Union during this crucial period were not as successful as they could have been. Millions of lives, billions of dollars, and the entire continent of Eastern Europe could have all experienced a different fate if it were not for the President?s below average executive performance. ...read more.