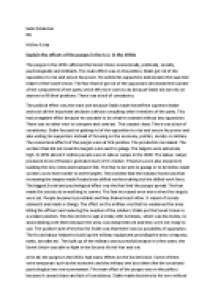 ﻿Selin Oztemizer IB1 History Essay Explain the effects of the purges in the S.U. in the 1930s The purges in the 1930s affected the Soviet Union economically, politically, socially, psychologically and militarily. The main effect was on the politics. Stalin got rid of the opposition to rise and secure his power. He united his supporters and became the supreme leader of the Soviet Union. The fact that he got rid of the opposition decreased the number of the components of the party which left more work to do because Stalin did not rely on anyone to fill their positions. There was a lack of consistency. The political effect was the main one because Stalin made himself the supreme leader and took all the important decisions without consulting other members of the party. ...read more.

The production increased. The workers that did not meet the targets were sent to gulags. The targets were extremely high. In 1939 almost 3 million people were in labour camps in the USSR. The labour camps produced most of Russia`s gold and much of it`s timber. Prisoners were also involved in building the new cities and transport link. The fear to be sent to gulags or to be killed, made workers work even harder to meet targets. The problem that the industry faced was that increasing the targets made Russia loose skilled workers taking out the skilled work force. The biggest Social and psychological effect was the fear that the purges spread. ...read more.

The positive side of this fact for Stalin was that there was no possibility of opposition. The forced labour helped to build up the military equipment providing the army weaponry, tanks, aircrafts etc. The built up of the military was successful because in a few years, the Soviet Union was able to fight in the Second World War and win. All in all, the purges in the 1930s had many effects on the Soviet Union. Some of them were temporary such as the economic and the military one but others like the social and psychological one were permanent. The main effect of the purges was on the politics because it caused chaos and lack of consistency. Stalin made decisions by his own without consulting any other members. If he consulted someone he made sure that everyone supported him. He focused on his own interests instead of the society. ...read more.