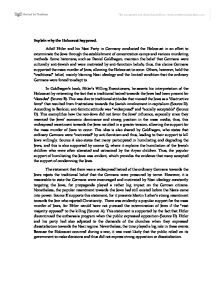 Explain why the Holocaust Happened

Explain why the Holocaust happened. Adolf Hitler and his Nazi Party in Germany conducted the Holocaust in an effort to exterminate the Jews through the establishment of concentration camps and various murdering methods. Some historians, such as Daniel Goldhagen, maintain the belief that Germans were culturally anti-Jewish and were motivated by anti-Semitism beliefs; thus, this claims Germans supported the mass murder of Jews, allowing the Holocaust to occur. Others, however, hold the "traditional" belief, mainly blaming Nazi ideology and the limited condition that the ordinary Germans were forced to adapt to. In Goldhagen's book, Hitler's Willing Executioners, he asserts his interpretation of the Holocaust by reiterating the fact that a traditional hatred towards the Jews had been present for "decades" (Source B). This was due to traditional attitudes that viewed the Jews as a "destructive force" that resulted from frustrations towards the Jewish involvement in capitalism (Source D). ...read more.

However, it is reasonable to state the Germans were encouraged and motivated by Nazi ideology constantly targeting the Jews, for propaganda played a rather big impact on the German citizens. Nonetheless, the popular resentment towards the Jews had still existed before the Nazis came into power. Source K supports this statement, for it presents Martin Luther's strong resentment towards the Jew who rejected Christianity. There was evidently a popular support for the mass murder of Jews, for Hitler would have not pursued the extermination of Jews if the "vast majority opposed" to the killing (Source A). This statement is supported by the fact that Hitler discontinued the euthanasia program when the public expressed opposition (Source D). Hitler and his party had also adjusted to the demands of the churches when they expressed dissatisfaction towards the Nazi regime. Nevertheless, the time played a big role in these events. ...read more.

Also, in Source G, M. Housden argues that due to their indifferent attitudes, many Germans "conformed to the demand" of the racial policy, and this "played small parts in making a fundamentally flowed system function." Thus, the occurrence of the Holocaust can be interpreted in another aspect, which supports the existence of the ordinary Germans' indifferent nature towards the Jews. The traditional belief that the ordinary Germans were pressured by the Nazi regime is rather unreliable, for there are evidences which support the mass support for the killing of Jews. To some degree, the indifferent attitude towards the Jews allowed the Nazi party to conduct the Holocaust. According to other scholars, such as Goldhagen, the Holocaust was approved and supported by the ordinary Germans who were motivated by the beliefs of anti-Semitism. Thus, anti-Semitic actions were carried out legally and also widely accepted. The ordinary Germans who willingly approved of the Holocaust played a rather important role in the occurrence of the massacre. ?? ?? ?? ?? ...read more.