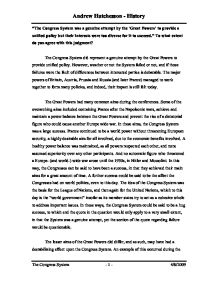 The Congress System was a genuine attempt by the Great Powers(TM) to provide a unified policy but their interests were too diverse for it to succeed. To what extent do you agree with this judgment?

"The Congress System was a genuine attempt by the 'Great Powers' to provide a unified policy but their interests were too diverse for it to succeed." To what extent do you agree with this judgment? The Congress System did represent a genuine attempt by the Great Powers to provide unified policy. However, weather or not the System failed or not, and if those failures were the fault of differences between interested parties is debatable. The major powers of Britain, Austria, Prussia and Russia (and later France) managed to work together to form many policies, and indeed, their impact is still felt today. The Great Powers had many common aims during the conferences. Some of the overarching aims included containing France after the Napoleonic wars, achieve and maintain a power balance between the Great Powers and prevent the rise of a dictatorial figure who could cause another Europe wide war. In these aims, the Congress System was a large success. France continued to be a world power without threatening European security, a highly desirable aim for all involved, due to the economic benefits involved. ...read more.

Other suggestions such as an international army to enforce borders, and a union of states opposed to revolution were also rejected. These examples show that without a common goal/aim (the defeat/containment of Napoleon, who was interred on St. Helena), the Quadruple Alliance lacked direction and cohesion. Other disputes/differences in objective included Britain and France not sending delegations to the Congress of Troppau, and Austria crushing revolutions in Italy although Britain disagreed with Austria's right to do so. Austria had Russian and Prussian support for these actions. These examples help to show how two separate power blocks were forming within the Congress System, which undermined the Great Powers' ability to function as a cohesive whole to determine and enforce European policy. This helps to show how a difference of interests between the Great Powers led to a weakening of the Congress System, which ultimately led to the demise and collapse of the System. In this sense the quote is proven to apply to the collapse of the Congress System, in that diverse interests did in fact stop the System from achieving its full potential. ...read more.