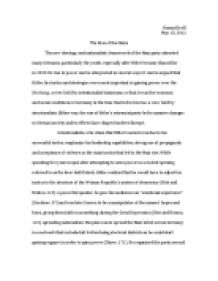 Factors That Helped The Rise of the Nazis

﻿Hanna Ewell May 15, 2012 The Rise of the Nazis The new ideology and nationalistic framework of the Nazi party attracted many Germans, particularly the youth, especially after Hitler became Chancellor in 1933. Its rise to power can be interpreted in several ways. It can be argued that Hitler, his tactics and strategies were most important in gaining power over the Reichstag, a view held by intentionalist historians; or that it was the economic and social conditions of Germany at the time that led to his rise, a view held by structuralists. Either way, the rise of Hitler?s extremist party led to massive changes in German society and its effects have shaped modern Europe. Intentionalists, who claim that Hitler?s ascent was due to his successful tactics, emphasize his leadership capabilities, strong use of propaganda and acceptance of violence as the main tactics that led to the Nazi rise. While spending five years in jail, after attempting to seize power in a violent uprising referred to as the Beer Hall Putsch, Hitler realized that he would have to adjust his tactics to the structure of the Weimar Republic?s system of democracy (Hite and Hinton, 113). A powerful speaker, he gave his audiences an ?emotional experience? (Kershaw, 57) ...read more.

Germany was losing all hope of regaining its footing after World War One and Hitler gave Germans an incentive to fight for her future (even if it was using the wrong methods). Hitler ended up raising the employment rate and promoting industrial growth through a party that to some had once seemed an ?insignificant radical, revolutionary splinter group that is incapable of exerting any noticeable influence on the great mass of the population or on the course of political developments? (Kershaw, 56). Annotated Bibliography Primary: Goebbels, Josef, Goebbels Diary, 1945? This source is an accumulation of extracts from several diary entries. Its purpose is to provide key dates and information about Germany in the 1930?s. As Minister of Propaganda, he was very close with Hitler and the source is therefore biased toward the ?high time? for the Nazis. It is useful, however, to show what someone so close to Hitler thought at the time, helping historians understand the situation from an internal perspective. It is also limited in that it does not provide any background information about the situation and therefore would not be useful to readers who did not know about his role in the Nazi party. Additionally, it is limited because, by being a diary entry and the accumulation of Goebbels? thoughts, it is often exaggerated or over-simplified. ...read more.

Its publishing date of 1991 makes it more reliable as Kershaw was able to fully assess the situation and look back on everything before forming his opinion. The source is however limited due to its strong use of opinion and due to the fact that it does not present opposing opinions that Hitler?s tactics were important. Hite, John and Chris Hinton, Weimar and Nazi Germany, John Murray, 2000. This source is an extract from a book published in 2000 by John Hite and Chris Hinton. Its purpose is to present Hitler?s tactics as the main reason for his rise to power, while still showing how the conditions influenced it. The source is useful to an historian trying to explain the rise of the Nazis, as it is very detailed about what it feels are Hitler?s important tactics, which it outlines at the beginning. It is also useful because it was published in 2000 and therefore the Hite and Hinton could look back and assess the situation before presenting the information. The information presented is trying to be unbiased in its argument because it does present some conditions it attempts to show both sides while arguing one. It is however limited because it does argue that the tactics were the most important instead of presenting both sides equally. ...read more.