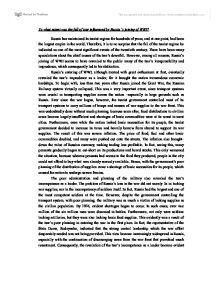 FALL OF TSAR AND WWI

To what extent was the fall of tsar influenced by Russia's joining of WWI? Russia has maintained its tsarist regime for hundreds of years, and at one point, had been the largest empire in the world. Therefore, it is to no surprise that the fall of the tsarist regime be indicated as one of the most significant events of the twentieth century. There have been many speculations about the chief causes of the tsar's downfall. However, among all reasons, Russia's joining of WWI seems to have revealed to the public many of the tsar's irresponsibility and imprudence, which consequently led to his abdication. Russia's entering of WWI, although treated with great enthusiasm at first, eventually revealed the tsar's imprudence as a leader, for it brought the nation tremendous economic hardships. To begin with, less than two years after Russia joined the Great War, the Russian Railway system virtually collapsed. This was a very important event, since transport systems were crucial in transporting supplies across the nation -especially in large grounds such as Russia. ...read more.

In fact, Russia had the largest and one of the most competent soldiers at the time. However, despite the government controlling the transport system, with poor planning, the military was as much a victim of lacking supplies as the civilian population. By 1916, evident shortages began to occur. In such cases, over two million of the six million men were disarmed in battles. Furthermore, not only were soldiers lacking artilleries, but they were also lacking basic food supplies. This evidently was a result of the tsar's poor planning in entering the war in the first place. In fact, the representative of the State Duma, Rodzyanko, indicated that the strong central leadership which the war effort desperately needed was not being provided. This view became increasingly widespread in Russia, especially with the continuation of discouraging news from the war front that provoked much resentment. Consequently, the revelation of the tsar's incompetence as a leader became evident as Russia's entering of WWI brought continuous news of defeat from the war front --what started out with enthusiasm, ultimately ended up with pessimism and defeatism. ...read more.

And, after being pressured by an unofficial group of politicians from the Duma, Tsar Nicholas finally abdicated on March of 1917 and brought an end to the tsarist regime. The main reason for the tsar's downfall laid in his failure to realize that his people could only take so much. Russia's joining of WWI brought-about many hardships for the country, which constantly fed discontent to its people. The lacking supply of food, the absence of a stable government in its most-needed times, let alone the continuous news of lost lives from the war front all aggravated its people. The tsar's indifference and refusal to cooperate with his own supporters gave them little reason to support his regime as well, for they no longer had faith as an effective system for ruling the country. Therefore, it is reasonable to suggest that the main cause of the tsar's downfall was Russia's joining of WWI, which aroused much social unrest, and proved the failure of the competence of a tsarist government. ...read more.