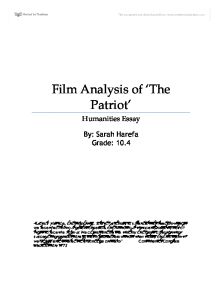 Film Analysis of The Patriot

Film Analysis of 'The Patriot' Humanities Essay By: Sarah Harefa Grade: 10.4 "Honor, justice, and humanity, forbid us tamely to surrender that freedom which we received from our gallant ancestors, and which our innocent posterity has a right to receive from us. We cannot endure the infamy and guilt of resigning succeeding generations to that wretchedness which inevitably awaits them if we basely entail hereditary bondage on them." Continental Congress Declaration, 1775 Film Analysis on the Patriot Our life has always been surrounded by media; from advertisement to major business of entertainment. Due to their constant presence, they have large influence in every major aspect, specially, in the young generation life. During teenage years, a person is on course where they develop the skills of knowledge. One the most important entertainment company, Walt Disney, quoted, "I would rather entertain and hope that people learned something than educate people and hope they were entertained." This statement represents all media goal, to entertain people regardless biases along the way. For this reason, a movie like The Patriot by Roland Emmerich about the American Revolution is a good example of the media lapse of influencing the young minds. Nevertheless, young minds are still relying on media to expand their knowledge as it is the pleasant way of gaining knowledge. ...read more.

There is no such offer given to slave, however the slave settlement where the slave are giving few freedom does exist until today. Studying all of these inaccuracies, you can consider it's affect on the young mind learning fictionist information. As Sydney J. Harris quoted, "The whole purpose of education is to turn mirrors into windows." Watching this movie kept young people to continuously reflect on the irony of the battle and it's inaccuracies to their own selves. They should've move forward and expand their horizon by knowing the exact fact and detecting credible source. By analyzing the specific facts the movie had offered, we can detect various biases that lead us all to take sides instead of the main excuse always thrown by the producer, "It is mere entertainment, no actual harm done." Young minds, especially tenth grader who will study this topic, always grab the first idea or message a movie offer instead of taking a step back and reconsider if it is the real message the movie is trying to get across. The movie starts out with Benjamin Martin's family (especially boys) are really excited to fight in war. As Gabriel similarly quoted, "I'm fighting for freedom, what are you fighting for Father? ...read more.

The Patriot movie was released during the Independence Day, July 4 and was nominated for many awards and hit the box-office, then again quickly faded as controversies of factual error rage in America. Altering history for sake of movie can be witnessed to happen continuously, one way or another is just to entertain the audience and gain business profits. The reason seems acceptable for entertainment, but not in favor of educational reason. Students attend school to learn and expand their knowledge, not to be entertained and hoped to understand the implicit meaning of the subject. We live the life of true knowledge, not fictions and imprecise idea. Ergo, the doubtable idea of varying actual facts from a course of history isn't going to enlighten a student in their education. A movie that should've been shown to the young generation for educational purpose should only contain precise fact, such as Revolution (1985) Johnny Tremain (1957),John Paul Jones (1959), The Devil's Disciple (1959) (Patriot Source - Other Films). These classics show the real fact not because they intend to, but the lack of modern technology. However, it shows that if the entertainment media want to show the real facts, they could. It is the modern day trend that we're able to handle countless inadequate cartoons and value sexual immorality, yet defeated by real facts of true events. Stay cautious against Hollywood standards. ...read more.