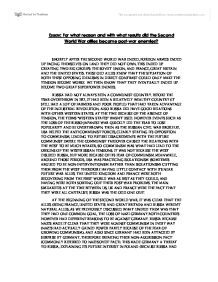 Essay: For what reason and with what results did the Second World War allies become post-war enemies? Shortly after the Second World War ended, foreign armies ended up facing themselves on land they did not own. This ended up creating two big groups: the Soviet Union, and France, Great Britain and the United States. These old allies knew that the situation of both these opposing idealisms in direct contrast could only make the tension become worse. We then know that they eventually ended up become two great superpower enemies. Russia had not always been a Communist country. Before the Tsar overthrow in 1917, it had been a relatively wealthy country (It still had a lot of farmers and poor people.) that had taken advantage of the Industrial Revolution. Also Russia did have good relations with other Western states. At the time because of the absence of tension, the terms "Western States" wasn't used. ...read more.

This made Germany a threat to Russia, explaining its future interest in Poland (because Russia had always been attacked via Poland.). Prior to that pact, Russia had tried, in 1939, to get U.K. help. Lord Halifax, the British Foreign Secretary went to Russia to discuss an alliance pact, however Britain refused because it believed Russia was too weak to be of any help. The fact that Russia was communist also contributed to this refusal. Also the fact that England refused when Russia asked if they could send troops into Poland if Hitler attacked, all contributed to the rise in tension between those countries. England had therefore made it clear that cooperation with Russia would be difficult. France on the other hand had had good or neutral relations with Russia. Especially in the Tsarist years, a majority of high-class Russians spoke French. The Allies therefore allied themselves to Russia not because they had good relationships, but because of their common enemy. ...read more.

Berlin was a great centre of conflict, from the currency battle to the blockade Stalin imposed; this made it clear that they were no longer the old allies they had been during the Second World War. We also know nowadays that each superpower was continually spying on the other one, contributing to the knowledge that trust wasn't what flowed between these countries. It is all these causes that ended up creating the Cold War, but since this war started as a rise in tension between multiple countries, having a starting date is not a possible task. We cannot put a starting date to a chain of events that gradually make up a "war". Also because it is a series of events, blame is very difficult, because everyone is responsible for one event or another, equally as if it was the cause or the consequence. However it has become quite clear that these countries became enemies mainly because Russia was communist. However this is not enough to blame Russia for "splitting up most of the world*". *Europe was a great centre of attention at the time. ...read more.