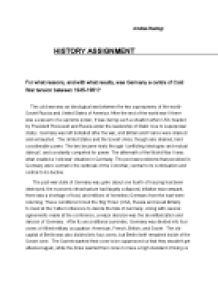 For what reasons, and with what results, was Germany a centre of Cold War tension between 1945-1961?

﻿Anvitaa Rastogi HISTORY ASSIGNMENT For what reasons, and with what results, was Germany a centre of Cold War tension between 1945-1961? The cold war was an ideological war between the two superpowers of the world-Soviet Russia and United States of America. After the end of the world war II there was a vacuum of a supreme power, it was during such a situation when USA headed by President Roosevelt and Russia under the leadership of Stalin rose to superpower status. Germany was left defeated after the war, and Britain and France were drained and exhausted. The United States and the Soviet Union, though also drained, held considerable power. The two became rivals through ?conflicting ideologies and mutual distrust?, and constantly competed for power. The aftermath of the World War II was what created a ?cold war? situation in Germany. The post war problems that persisted in Germany were central to the outbreak of the Cold War, central to its continuation and central to its decline. The post-war state of Germany was grim: about one fourth of housing had been destroyed, the economic infrastructure had largely collapsed, inflation was rampant, there was a shortage of food, and millions of homeless Germans from the east were returning. ...read more.

Russia refused the aid of the Marshall Plan and, as a result, East Germany was not completely rebuilt. East Germany was established as a Stalin-style Socialist state. This lack of reconstruction showed through even after the reunification. Belgian economic historian Herman Van der Wee concludes the Marshall Plan was a great success. He said, "It gave a new impetus to reconstruction in Western Europe and made a decisive contribution to the renewal of the transport system, the modernization of industrial and agricultural equipment, the raising of productivity, and the facilitating of intra-European trade.? After that, the Truman Doctrine, a plan to help states going through a struggle for freedom against their oppressors, was instituted in 1948. It was a successor of the Marshall Plan. President Truman said, "I believe it must be the policy of the United States to support free peoples who are resisting attempted subjugation by armed minorities or by outside pressures." The Truman Doctrine instituted a policy of containment which limited communism to only the areas which were under the soviet control. Elsewhere, the United States would be given the freedom to resist the expansion. Following the agreements made under the doctrine, Germany split up into Federal Republic of Germany and German Democratic Republic. ...read more.

This led to more tensions between USA and Russia thus intensifying the cold war. During the Cold War, Germany thus became the center for the conflict between Communism and Democracy. Germany was the place where all the tensions between the two separate ideologies were played out. Due to its location, Berlin was torn in half by the struggling parties. The neglect that East Germany suffered through at the hands of the Communists caused not only economic problems but also social problems as the Western and Eastern Germans grew apart as society. The scars that the Communist Party left on the East Germans are still being repaired as this reconstruction had heavy financial impacts on the west. Not only had much of East Germany not been rebuilt, most of what was produced had been shipped back to the Soviet Union as "war reparations". Divided Germany had also caused a social split to occur between the Eastern and Western Germans. The Western German's lives had greatly improved since the end of World War II but the Eastern German's lives were still hindered by the destruction created by the war that could not be fixed under the Communist regime. These social and economic were the main reason why Germany was indeed at the centre of Cold War tension. ...read more.