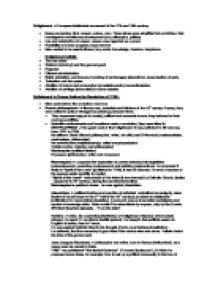 French Revolution and the rise of Napoleon - revision notes

Enlightment -> European intellectual movement of the 17th and 18th century. * Ideas concerning: God, reason, nature, man. Those ideas were simplified into worldview, that investigated revolutionary development (art, philosophy, politics) * Use and celebration of reason, reason was regarded as a power * Possibility of human progress, improvement. * Men wanted to be useful citizens; key words: knowledge, freedom, happiness. Enlightment beliefs: * The rule of law * Welfare (dobrobyt) and the general good * Progress * Efficient administration * Better education, poorhouses, founding of orphanages (sierocince), emancipation of serfs * Toleration and free press * Abolition of torture and persecution (przesladowanie), humanitarianism * Abolition of privilege (immunitet) for some estates Enlightment in France (before the Revolution of 1789): * More serfs before the revolution were free * French philosophers -> literary man, scientists and thinkers of the 18th century France, they were united in spite of divergent (rozbiezny) personal views. * They expressed support for social, political and economic forces; they believed in their enormous abilities. * Scientific achievements and inventions made a revolution, they were listed in ENCYCLOPEDIA -> the great work of the Enlightment, it was published in 28 volumes, from 1751 to 1780. Its editors: Denis Diderot (philosopher, writer, art critic) and D'Alembert (mathematician, mechanican, philosopher). Its contributors (wsp�lautorzy): called encyclopedystes. Voltaire (writer, historian and philosopher) Montesquieu (political thinker) Rousseau (philosopher, writer and composer) Montesquieu-> proposed the separation of powers (wladze) into legislative (ustawodawcza), executive (wykonawcza) and judiciary (sadownicza). He proposed it firstly in ''Spirit of the Laws'' (published in 1748), it has 22 volumes. He was a member of the second estate (nobility & royalty). ''Spirit of the Laws'' was placed on the index (it was banned) by Catholic Church. (index - appeared in 16th century, during the counterreformation) Montesquieu's political views: he was against absolutism. Absolutism -> political doctrine and practice of unlimited, centralized sovereignty; Jean Boden (French lawyer in the 2nd half of the 16th century) ...read more.

and internal tariffs were abolished * Uniform system of weights and meaqsures was introduced * Le Chapelier Law - enacted (uchwalony) in 1791. Strikes became illegal in France. Despite those reforms there was still financial crisis. * Administrative system was sweeped away, France became divided into 83 departments. Departments were subdivided into districts (okregi) and communes (gmniy). This transformation promoted centralization of France and helped its economy. Citizens elected their own local features. It was their own legislatures (zgromadzenia ustawodawcze). Judicial reform -> the revolutionaries swept away judicial system of the ancien regime. They established a civil court in each district and criminal court in each department. Judges on all tribunals were to be elected. The Assembly decreed, that felonies (ciezkie przestepstwa) would be tried by juries (lawy przysieglych). Criminal defendants (oskarzeni) gained the right to counsel (adwokat). This right had been demanded during the ancien regime. * Deputies hoped to make administration of justice more accessible and expeditious (sprawny). Civil code = kodeks cywilny Penal code = kodeks karny * The new penal code was adopted in 1791. Fewer crimes were punishable by death. All sentences of death were to be carried out by the guillotine (instrument was introduced in 1792. Later the French underworld (swiat przestepczy) called it ''the widow''. Invented by Joseph Guillotine - medic, physician, elected to the National Assembly). * Practices like torture, branding (pietnowanie) and hanging were abolished. State & Roman Catholic Church: * Church properties were taken by the state, state was responsible for Church's affairs, new financial and administrative framework for the Church was created. * Civil Consitution of the Clergy, July 1790 -> reorganized Church in France on national bases. - Reduced number of bishops from 144 to 83, to have each diocese (diecezja) correspond to a department. - Bishops were to be elected by citizens, by departmental electional assemblies. - Parish priests (proboszczowie) were also elected, by electors in districts - State has to pay a clergy's wages This constitution passed by the National assembly was formally sanctioned by Louis XVI. ...read more.

The Hospitalers were a military order of the Roman Catholic Church, they fortified ad administrated the island until it was captured by Bonaparte). * After capturing Malta, French landed at Abukir Bay on 1 st July 1798. They captured Alexandria. When they took it, Napoleon issued an Arabic proclamation, he sured the Egyptians, that he came as a friend to Islam and to the Ottoman South. Then, he wanted to punish the Mamelukes. * From Alexandria, French advanced to the Cairo (capital of Egypt, founded in the middle ages). THE BATTLE OF THE PYRAMIDS (near Cairo) July 1798 -> The Mamelukes were crashed by Napoleon. After the battle he entered the Cairo and demonstrated his sympathy to religious leaders. 1 st August 1798 -> French squadron (eskadra) at anchor (na kotwicy) in Abukir Bay was completely destroyed by admiral's Horatio Nelson's fleet. The battle is known as a Battle of The Nile. Results of the battle: o It isolated Napoleon's army in Egypt. o Heightened British prestige and secured their control of the Mediterranean. o The next anti-French coalition was formed: THE SECOND COALITION (Great Britain, Austria and Russia) o Show the Europe, that Bonaparte is not impossible to beat. Spring 1799-> French Army of the Italy was defeated so it had to abandon the great part of Italian Peninsula. The Directory-> was ineffective. Emanuel Sieyes -> one of the directors, he was convinced, that only a military dictatorship can restore the monarchy. Napoleon left his army in Egypt and managed to return to France in order to set the republic and seize the power. November 1799 -> The Coup d'�tat overthrew The Directory. It is also known as the Revolt of the Brumaire or 18 Brumaire. Emanuel Sieyes, Pierre Roger Ducos and Fouch� were forced by Napoleon to resign as Directors. The Coup d'�tat brought Bonaparte to power as a 30 years old man. He proclaimed the end of the revolution. ...read more.