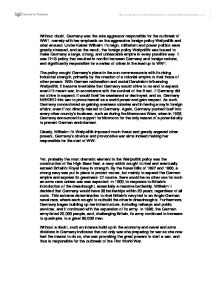 Without doubt, Germany was the sole aggressor responsible for the outbreak of WW1, namely with her emphasis on the aggressive foreign policy Weltpolitik and what ensued. Under Kaiser Wilhelm II's reign, militarism and power politics were greatly stressed, and as the result, the foreign policy Weltpolitik was issued to make Germany a large, strong, and unbeatable empire in every possible way. It was THIS policy that resulted in conflict between Germany and foreign nations, and significantly responsible for a series of crises in the lead up to WW1. The policy sought Germany's place in the sun commensurate with its rising industrial strength, primarily by the creation of a colonial empire to rival those of other powers. ...read more.

As such, Germany concentrated on gaining overseas colonies and in having a say in foreign affairs, even if not directly related to Germany. Again, Germany pushed itself into every other country's business, such as during the Morroccan Wars, when in 1905, Germany announced its support for Morrocco for the only reason of a potential ally to prevent German encirclement. Clearly, Wilhelm II's Weltpolitik imposed much threat and greatly angered other powers, Germany's obvious and provocative war aims indeed making her responsible for the start of WWI. Yet, probably the most dramatic element in the Weltpolitik policy was the construction of the High Seas fleet, a navy which sought to rival and eventually exceed Britain's Royal Navy in strength. ...read more.

This extreme determination to rival Britain's navy led to an Anglo-German naval race, where each sought to outbuild the other in dreadnoughts. Furthermore, Germany began building up her infrastructure, including railways and public services, and it continued with the expansion of its army. In 1890, the German army listed 20,000 people, and, challenging Britain, its army continued to increase to quadruple, to a great 80,000 men. Without a doubt, such an intense build up in the economy and naval and arms divisions in Germany indicates that not only was she preparing for war as she now had the means to do so, she was provoking the great powers to start a war, and thus is responsible for the outbreak of the First World War. ...read more.