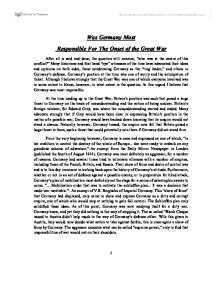 Was Germany Most Responsible For The Onset of the Great War After all is said and done, the question still remains, "who was at the centre of this conflict?" Many historians and first hand "eye" witnesses of the time have advocated their ideas and opinions on both sides, those condemning Germany as the "ring leader," and others in Germany's defence. Germany's position at the time was one of worry and the anticipation of threat. Although I believe strongly that the Great War was one of which everyone involved was to some extent to blame, however, to what extent is the question. In this regard I believe that Germany was most responsible. ...read more.

Naturally however, Germany tensed; the empire now felt that Britain posed a huge threat to them, such a threat that could potentially ruin them if Germany did not stand firm. From the very beginning however, Germany is seen and expressed as one of which, "in her ambition to control the destiny of the whole of Europe... she were ready to embark on any grandiose scheme of adventure."-An excerpt from the Daily Mirror Newspaper in London (published the fourth of August 1914). Germany was most definitely an aggressor, for a number of reasons. Germany had several times tried to terminate alliances with a number of empires, including those of the French, Britain, and Russia. ...read more.

Berghahn of Imperial Germany. This "show of force" that Germany had displayed, only came to show and express Germany as a dirty and corrupt empire, one of which who would stop at nothing to gain full control. The Schlieffen plan only solidified these ideas. As of this point, Germany was now readying itself for a dirty war. Germany knew, and yet they did nothing in the way of stopping it. The so called "Blank Cheque issued to Austria didn't help much in the way of Germany's defence either. With this given to Austria, they would now decide what action to take against Serbia; this is once again a show of force by Germany. The aggressor executes what can be called "supreme power," only to find that responsibilities of war would rest on their shoulders. ?? ?? ?? ?? 1 ...read more.