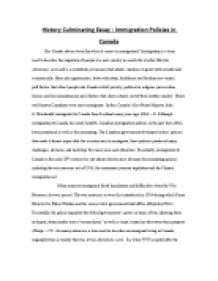 Has Canada always been fair when it comes to immigration?

﻿History Culminating Essay : Immigration Policies in Canada Has Canada always been fair when it comes to immigration? Immigration is a term used to describe the migration of people to a new country in search for a better lifestyle (dictionary.com) and is a worldwide occurrence that allows countries to grow both socially and economically. More job opportunities, better education, healthcare and freedom are various pull factors that attract people into Canada whilst poverty, political or religious persecution, disease and discrimination are push factors that shove citizens out of their mother country. Many well-known Canadians were once immigrants. In fact, Canada?s first Prime Minister John A. Macdonald immigrated to Canada from Scotland many years ago (Nick ? 4). Although immigration to Canada has many benefits, Canadian immigration policies in the past have often been prejudicial as well as discriminating. The Canadian government developed useless policies that made it almost impossible for a certain race to immigrate; these policies produced many challenges, obstacles and hardships for many races and ethnicities. Essentially, immigration to Canada in the early 20th century was not always fair because of many discriminating policies including the war measures act of 1914, the continuous journey regulation and the Chinese immigration act. ...read more.

The Continuous passage regulation was passed in 1907 and stated that only ships, which had sailed on a ?continuous journey? from their homeland would be allowed to immigrate to Canada (Fine- Meyer- 11). In other words, the ship had to travel all the way to Canada from its homeland without stopping in order to make it into Canada, something that was almost impossible due to the long distance. Canada didn?t want to accept South Asian immigrants but rather preferred immigrants from allied countries such as Britain and France. William Mackenzie King, who was prime minister at the time, knew that there was no direct water route from India to Canada (Fine- Meyer - 14) and thus developed the unnecessary policy hoping it, would successfully keep the undesired immigrants out. However, an Indian Ship known as the ?Komataga Maru? managed to overthrow the policy and reached the shore?s of Vancouver on May 23rd, 1907 (Vizcan Systems Corporation). The ship was occupied with 376 South Asian passengers, and only 24 of these passengers were accepted into Canada. Indians felt betrayed by Canada, as they had just sailed a long, harsh 21-day journey and were denied entrance into the country (Vizcan Systems Corporation). ...read more.

Immigration to Canada in the early 20th century was not always fair because of many discriminating policies including the war measures act of 1914, the continuous journey regulation and the Chinese immigration act. All these policies were unfair and biased as they discriminated against individuals because of their background. These people chose to immigrate to Canada in search of a better lifestyle and home, but were instead faced with unfairness and discrimination, as some weren?t even allowed entry into Canada. By making these rules, Canada completely went against its morals and value system as they treated people with none or little respect because of how they looked. Fortunately in present day, immigration is far from what it is used to be. Canada has opened up and become home to thousands of immigrants. In fact, in 2010 Canada opened its doors to many refugees, including homosexuals who would have been executed in their home country. Although the immigration process is long and consists of application forms, fees, medical exams, police certificates, etc., it is fair and non ?prejudicial and people who are denied entry into Canada are denied for valid reasons (Citizenship and Immigration Canada). Also, Canada has formally apologized for its discriminatory practices as Canada?s Prime Minister; Stephen Harper said, ?We fully accept the moral responsibility to acknowledge these shameful polices of our past,? (Government Canada.) ...read more.